The Doctor's Adventure on Scaro: Intro and Program Notes 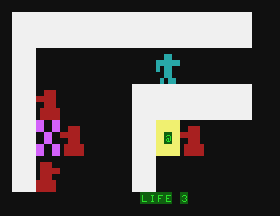 INTRO TO THE DOCTOR'S ADVENTURE ON SCARO

You’re an inveterate tinkerer.  Because you have a Ph.D. in Physics, and also because this is a fact you never hesitate to remind people about, your friends call you "the Doctor."  Because of your advanced knowledge of physics you have managed to invent a time machine.  Using your time machine you have begun to travel through space and time.  Unfortunately, during your travels you uncover a plot by the evil species, known as the Darlecs, to gain control of the entire universe.  They have managed to capture the "Infinity Device" which will allow them to destroy a whole star system, if they should so desire.  They plan to use the threat of this device to extort untold wealth from the other civilizations of the universe.

You were in the midst of attempting to recover the device when you were captured, but now you have managed to escape and continue your mission.  You must collect the Infinity device parts (Purple) while avoiding the Darlecs (Red).  Your advantage is speed.  Darlecs are a somewhat sluggish robotic race.  When not actively following orders they tend to shut down into an energy saving mode from which it takes a moment for them to recover.  You can use this to your advantage when exploring their lair.

Pressing space will cast an "energy net" (orange) in whatever direction you were last moving.  When Darlecs run over this net they will be destroyed.  Beware, you cannot cast a net directly onto a Darlec.  You are able to pick nets up by running over them.  You have managed to collect 3 by the time the game begins.  Another 4 can be found at random locations throughout the base.

There are also nuclear reactor energy stations (yellow) spread throughout the complex.  These can be modified to explode spreading a deadly pulse of energy, which will destroy all the Darlecs in a particular area of the complex.  However, they can be tricky to adjust, so you might have to work a little while at getting them to go critical (by running into them).  When they do go critical, a countdown from five will begin.  You have that much time to get to the next area of the complex to escape the energy pulse.

Collect the yellow keys to open the locked doors of the complex.  There are enough keys for all the doors, but sometimes they will be protected by Darlecs. Pressing the 'K' key will display the number of keys you currently have.

If you run into a Darlec you die.  If the Darlecs touch you, they will shock you with their electrical prods. You can receive 3 such hits before you die.  Use the Darlecs literal machine responses against them by luring them into different areas of the complex in order to get around them or destroy them more easily.

Don't assume anything about the maze of the Darlecs.  Some mysteries and anomalies exist in how it is structured, that you might be able to use to your advantage.


P.S.
I would like to thank my son Charlie for his contribution of the 8-bit music intro to the game and his work as beta tester and the rest of my family for their patience with my programing hobby activities.

DOCTOR3.TXT
Tweaks to the Maze and bug fixing. Added the ability to call up # of keys and parts.

DOCTOR5.TXT
Fixed a rare problem with key pickup routine, when key is on the edge of the screen between two areas.
Posted by jgerrie at 20:36