One of the most interesting quirks about the sad history of the TRS-80 MC-10 was although it ceased production only a year after it was released in North America, and so was banished to the category of failed "never-ran" 8-bit computers forever overshadowed by the Ataris, Commodores and better known Tandy products (or so I thought), the full story of the orphan MC-10 turned out in reality to be more positive.  Somewhat akin to the case of the actor Jerry Lewis, the design for the MC-10 (although I didn't learn this until recently) was passed to a French computer company called Matra-Hachette and in a much more sexy red plastic case went on to become one of the great intro 8-bit systems of that country, something like the ZX81 in Britain.  It was called the "Alice" and it makes the beige North American MC-10 look positively dowdy: 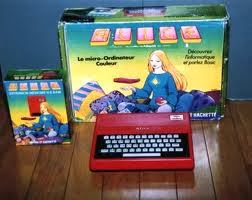 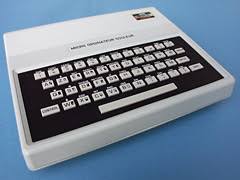 I didn't know anything about this until I stumbled upon it while researching my programming projects for the MC-10.  It was kind of like discovering that your dotty old grandfather was actually a 1960 rock-and-roll heart throb, or that your wife has a twin who is an international spy, whod'a thunk it!

What this meant in practical terms was that there was potentially more software out there for the MC-10.  All I had to do was dust off my old highschool Canadian French and go find it.  Well it turned out that the French hadn't stayed long with the garden variety MC-10, but had quickly updated the internal hardware specs, and soon after exterior casing, creating much more powerful machines with powerful graphics capabilities.  So most of the software preserved on the Net was machine language games for these higher level machines.  That being said, a certain amount of Basic language software was created for the MC-10 level Alice, and some of it seemed worth translating to the MC-10.  Two of these programs I have translated are International Draughts (pronounced Drafts), which is simply the version of checkers (Jeu de Dammes) played in France.
INTERNATIONAL DRAUGHTS INSTRUCTIONS

When entering moves type the row letter first followed by the column number.  After entering the starting space and all the landing spaces, press ENTER to make your move. International Draughts is played by two players (or you and the computer), on opposite sides of a playing board, alternating moves.  One player has light blue pieces, and the other has orange pieces. It is against the rules for one player to move the other player's pieces.  The player with the light blue pieces makes the first move unless stated otherwise. A move consists of a player moving their piece diagonally to an adjacent unoccupied square.  If the square is occupied by an opponents' piece, it may be captured (and removed from the game) by jumping over it to the unoccupied square one square beyond the opponent's piece. The playable surface consists of using only the dark squares of a board with alternating light and dark squares. A piece may move only diagonally into an unoccupied square. Capturing is mandatory.  The player who has no pieces remaining or cannot move owing to being blocked loses the game.  Uncrowned pieces move one step diagonally,  and may capture opponents' pieces by moving two consecutive steps in the same direction, jumping over the opponent's piece on the first step.  Multiple opposing pieces may be captured in a single turn provided this is done by successive jumps made by a single piece; these jumps do not need to be in the same direction but may zigzag changing diagonal direction.  In international draughts pieces may also capture (diagonally) backwards. When a piece reaches the kings row, the farthest row forward), it becomes a king, and is marked by becoming blue for the light blue pieces or red for the orange pieces and acquires additional powers including the ability to move backwards.  As with non-king men, a king may make successive jumps in a single turn provided that each jump captures an opponent man or king.  In international draughts the flying kings rule allows kings to move as far as they want along unblocked diagonals. This move can (but need not) end by a capture in the usual way, jumping over an opposing piece to an adjacent unoccupied square. Since captured pieces remain on the board until the turn is complete, with flying kings it is possible for a king to reach a position where he is blocked from moving further by a piece he has just captured.  Don't forget, that in cases of flying kings, landing spaces need not be immediately next to a jumped piece.

Another couple of games are Strategie and Isola.  Strategie is a colourful variation of the classic 8-bit game MAXIT programmed first for the Pet, which I have also ported: