An interesting thing I have discovered about the MC-10 as I have explored the Net looking for software to port, is the other computers that share some hardware affinity with it (besides the Tandy Coco).  The most obvious hardware affinity has to do with the distinctive graphics chip used by the Coco and the MC-10: the Motorola MC6847 Video Display Generator (VDG). I had always felt a little ashamed about this aspect of the MC-10 and Coco when compared with other 8-bits. The VDG was not the most powerful graphics chip by any means, certainly not by 1983.  However, it was one of the very first colour graphics chips for use with a TV and powerful indeed when it was first developed in the late 1970s. When I realized that the Coco and MC-10 were not the only machines that had used this chip, I embarked on a quest to find their distant cousins, because I thought, if I could find programs developed in Basic for these other machines and their shared distinctive grotesque, unusual, but eerily familiar nuclear neon green 32*16 text screen (and 64X32 basic graphics set) these would certainly be more easily converted than the programs of other 8-bit machines with their much more typical 40X24 screens.

In the process of my search I came across a host of such machines (many with groups like that for the MC-10 on Yahoo). For example, there was the very early home computer/game system called the APF Imagination Machine. Then there was the Dragon 32/64 Computer made in Wales and there was the Dick Smith VZ-200/300.

Dick Smith was an electronics retailer in Australia who licensed  the design for the Video Tech Laser 210 / Laser 310 - Texet TX 8000 - Salora Fellow computers, which were sold all over the world, but especially in central and Northern Europe. The VZ 200/300 had developed a fierce following in Australia where the Dick Smith electronics company was seen as a real "Aussie Battler" taking on the likes of giants like Radio Shack. In learning about these other systems I learned about the powerful affection other people had for their childhood introductory computers and about the diverse history of home computing (a truly global phenomenon) in the early 80s. I also found ideas and code to bring to the MC-10.

From the VZ200 for instance I ported, or took inspiration from, Dracula's Castle, which has many interesting semigraphic images of strange monsters, which I won't show here (except for the Zombie below) so as not to spoil the fun you might have in discovering them for yourself, and Gammon, which provides a nicely laid out version of backgammon. I had ported a version of backgammon from a TRS-80 model 1 program, but in the midst of converting it I wasn't able to get the screen to display as nicely as this version. I'm not sure which one plays a better game of backgammon. I took the Model 1 backgammon from code provided by Jeff Vavasour on his really neat site http://www.vavasour.ca/jeff/level1/simulator.html. I think Dracula's Castle is originally from the Sinclair ZX81 and was completely in black and white and might have been called "Tomb of Dracula."  It's images certainly match those of Dracula's Castle: 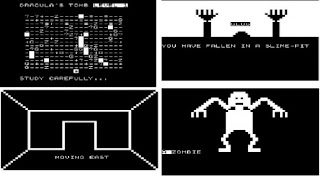 My port of the game "GhostBlasters" by G. Rowe from the VZ was not as direct a port as these others because it had been originally designed mostly for the lowres graphics screen, except for its nifty title screen, as can be seen above, and a bonus round screen in which the stay-puff-marshmallow man makes an appearance. The original main action graphics looked like this: 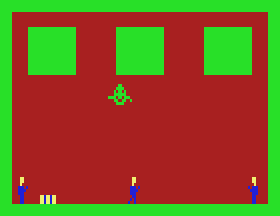 The premise seemed interesting enough to try to make a port for the MC-10.  However, I didn't have the ability to program the game using the hires graphics of the MC-10, which can only be got at through machine language programming. So I decided to simply try to re-program the main action screen myself in lowres graphics (see the black screen above), while using the title and bonus screen lowres basic code from the original. The result is a hybrid re-program/port I re-christened "GhostBusters." It can be a bit tricky, but with some persistence, players will discover that there are certain places on the screen where you can safely position your central ghost buster, so that he will never cross the stream of the other two ghost busters, for example, you can move him completely to the left or right to stand right next to one of the other ghost busters.  From such a position you can then make brief forays out into the more dangerous middle (where you can cross streams) when absolutely necessary. Give it a try in both its VZ original form using one of the nice VZ-emulators for that machine, or the versions I have made for the Coco and MC-10 which can be found here: https://github.com/jggames