I have made a BASIC program recreating the game Shoplifting Boy (万引き 少年) for the NEC PC-6001.

The original version of the game was created by Hiroshi Suzuki for the Commodore PET 2001 in 1979. It is credited with being one of the first "stealth" games. I reprogrammed this version based on many viewings of a video which discusses the historical impact of Suzuki's game on the stealth video game genre:

The author of that video used a sequence of video showing what is apparently a port of the original to the NEC-PC6001. It's possible that it is being played on one of the other MC6847-based PCs from Korea or Japan, but the appearance of the title "N60 Basic on the startup screen makes me pretty confident it's on the NEC. Here are some screenshots of the original Commodore PET version for comparison: 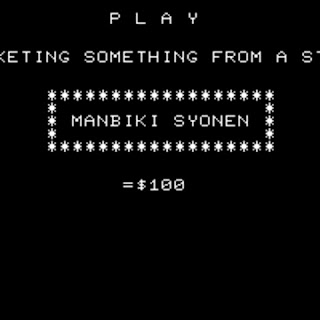 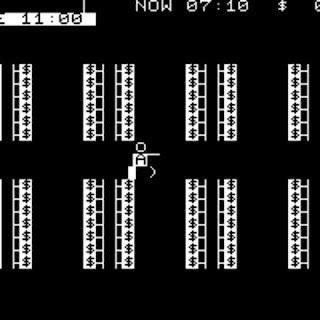 You can see a transliteration of the original game name as "Manbiki  Syonen." Not really sure if "shoplifting boy" is a direct translation or simply the closest approximation in English of some idiomatic Japanese term for young male toughs who practice the art of the 5 finger discount.

In the Commodore PET version it looks like the shoplifter is carrying a bag for his loot. The bigger screen of the PET (40 X 25 versus 32 X 16 on the NEC) allows for more items. Things are a little more cramped in the NEC version, and even a little more so in my MC-10 version. Since the MC-10 doesn't have the special line-draw characters, only semigraphics characters, I had to extend the height of the figures to 3 character rows, to get "feet" on the bottoms of each leg. This necessitated a special routine that refreshes the entire background so that shelves can be redrawn after the character passes overtop them, etc. Still, from what I can see from the video, I think my version is much faster than the NEC version. Most Basic games are pretty slow on the NEC. Its combination of the Z80 and MC6487 video chip wasn't conducive to the creation of a speedy 8-bit system. So I suspect that my version will be more enjoyable to play than the NEC version. Can't say how the Commodore PET version would have played. Based on comments made by the game historian, Stealth Docs, in the video, it would appear to be very difficult to find the game on the Net in any kind of working form.

So for those who might be curious, my version can be played in a Javascript emulator here: http://faculty.cbu.ca/jgerrie/MC10/. Just choose "SHOPLIFT" from the cassette menu and then type RUN and hit Enter. Here's a video of my version in operation:


Since making that video I have added a musical refrain "Money Money" from Abba instead of the buzzer when you clear the screen. I have also better calibrated the timer and scoring with the help of my son Charlie. Thanks my good chum!  The game can also be played from my GameJolt page.  Just choose "Play our classic 8-bit games" and then select "SHOPLIFT" from the Cassette menu:

I'm currently working on an empire building simulation called "World Governor," which I'm translating from a German program for the Laser 8-bit home computer. I added a nifty random "flag"generator routine for each country. The game has tactical nukes and you can enter your leader's name, so you can, like my son used to do in the modern game "Civilization," have Gandhi nuke an opposing country as he ruthlessly builds his empire. 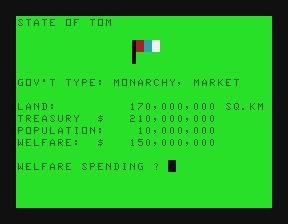 I had to create a subroutine for putting commas in big numbers, since there are so many used in this game. The routine works pretty well. I will have WorldGov debugged soon. Also added the comma routine to my Wildcat game, since it also uses big numbers in simulating the finances of running a oil and gas wildcatting business.