Here's the progression: 1974 Maze War by Steve Colley for the Imlac PDS-1, 1978 Escape! by Muse for the Apple II, 1979 Ratrun by Code Works for the Commodore PET. These are the origins of the entire first person virtual world games of today. I wanted to add at least one to my collection of classic games for the TRS-80 MC-10. Maze War and Escape were machine language games. The first one was for an early minicomputer system.  Here's the blurb from Wikipedia:

Maze, later expanded and renamed to Maze War, is a 3D networked first-person shooter originally developed by Steve Colley, Greg Thompson, and Howard Palmer for the Imlac PDS-1 computer. It was largely developed between the summer of 1972 and fall of 1973, at which point it included shooter elements and soon after was playable over ARPANET between multiple universities. It is considered the earliest first-person shooter; ambiguity over its development timeline has led it to be considered, along with Spasim (March 1974, on PLATO), to be one of the "joint ancestors" of the genre.

Very few people would have been directly influenced by Maze War. Most people would have got their first exposure to such games by playing either Escape! or Ratrun. The Digital Anitquarian has a nice write-up on Escape!  He reveals that Lord British was inspired to write Akalabeth by Escape! .

These early attempts at rendering a virtual reality are hilarious when compared to today's ray-traced wonders, but every software revolution has to start somewhere. And Ratrun is part of that revolution-- a very BASIC part. Because it was first published in Cursor Magazine (#13) it would have got fairly wide distribution. People could simply borrow the magazine from a library and type it in for themselves. Very few would have been able to purchase Maze War, but very many might have had their first experience of a computer generated artificial reality in the form of the slowly rendered lines of Ratrun running on a school PET.  As one commenter on the video of my version states "Such fun to see these old machines work like the ant that could."  For more info see:

And here's a WAV file for those who would like to try it on real MC-10 hardware:

Another early classic game I got around to porting this week was the original Star Trek game from 1971 by Mike Mayfield written HP BASIC.
The source code I was able to locate was copyrighted in 1972, but the literature clearly indicates 1971 as the beginning of this prolific line of games.  Mayfield must have continued to tweak the program just like everyone else. For one thing, I found a bug in it that affected the way that it handled the Photon Torpedo "trajectory calculator" menu option of the #7 "Computer" option.  It seems to have a problem with a FOR/NEXT loop to allow you to do multiple calculations for the different Klingon battle cruisers in your quadrant.  It runs into a NEXT without FOR error.
The code also seems to provide you automatically with a calculation for one of the cruisers when you first select the option but then flick a variable switch, which then means you must type in your own and the cruiser's sector coordinates for subsequent calculations.  It almost seems like there was some uncertainty or reluctance on the part of Mayfield about introducing this powerful feature, which can guarantee a "one-shot kill" of the enemy.  Part of the charm of the game as I played it in other (of the multiple) versions, is trying to develop the knack of figuring out shooting angles for your limited supply of photon torpedoes.  This feature seems to have been left out by others.
In any case I fixed the bug by getting rid of the NEXT statement and simply looping back to the prompt that asks if you want to do further trajectory calculations.  I also made an alteration to the symbol used for the Enterprise. I changed it from <*> to <^>.  I've seen many version that use <E> too. The original one using the asterisk was difficult to distinguish from the asterisk stars, and looked sinister-- more like an enemy. 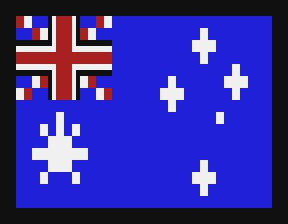 Finally, at the suggestion of Paul Berg, one of the Aussie members of the MC-10 Facebook group, I was able to obtain an old Australian Coco magazine listing for the MC-10 "Cattle Baron".  Paul said he had some very fond memories playing this game back in the day.  I had some fun cleaning up the text that I was able to copy from the scan.  There probably hasn't been a working copy of this interesting board game/simulation of the Australian cattle industry for many decades. I added a little graphic of a cow multiplied across the screen to create a "herd," which I added to the round up screen. I also fixed what I think was a typo in the original listing for a little graphic of a bunch of blokes wearing Aussie hats at the "cattle auction."  I think the graphic characters translated to letter keys to be pressed  listed in a REM line just above the actual PRINT line was missing one character.  By looking at the graphic in actual PRINT line and counting the jumbled graphics that appear in the place of what are supposed to be the actual graphic characters, I was able to see that a character was missing and guess which character it was.
Paul will hopefully add some of his copies of the magazine to the small number available on the Coco archives.  That way I can look for a correction in subsequent issues, and perhaps find some more interesting type-in programs for the MC-10.
Well that wraps it up for my programming activities for the last couple of weeks. Now I just have to wait to hear about whether any of efforts earn any recognition from the "The Double-Do" contest being run by www.trs-80.org.uk
http://www.trs-80.org.uk/2020competition.html
I submitted a number of entries from my efforts at writing original programs over the last year.
ADDENDUM
I got runner-up in the Colour program section of the Do-do contest.  You can read about it here:
http://www.fabsitesuk.com/tandy/trs8bit1404.pdf?fbclid=IwAR1X7Pcvc1hDmWscgzYlp_GEXrdrk7DumsUGc7d6w-G5uye3ptYE26kc_EM
Posted by jgerrie at 17:36 No comments: