I have already ported Howard Batie's second Star Trek themed text adventures for the Coco to the MC-10. The Coco program for his first adventure, which can be found in Hot Coco Magazine August 1983, was based on an original game for the TRS-80 16K by Randy Hawkins in 80 Micro (August 1982, pp. 174-184). In fact, the version I ported might be more akin to Mr. Hawkins' original, as I based it on some source code that I found for the TRS-80 Model 100, which might have come from the Model I version rather than the Coco version.  However, the fact that Batie's name is on it leads me to believe that it must be based on the Coco version. I have source for the Hot Coco magazine version, but it's from OCR text of a scan of the article, and it was getting very tedious trying to get it into running form, so I switched to the source for the TRS-80 Model 100. I might still plunk away at the original magazine source, because Mr. Batie suggests in the article that there are some differences between his version and the TRS-80 Model I version, which might be nice to uncover. Also, the magazine version uses the technique of encoding all of the messages, so you can't cheat by looking at the source code.

There were a number of errors in the Model 100 source. Some of these problems are outlined in a Gaming After 40 blog post. I found others and corrected them. There was a big problem with how the game handled the button pushing for the impulse engines, which essentially allowed you to correct the orbit without having to solve the puzzle. GamingAfter40 suggests that the way to get rid of the Klingon guarding the Tribble on level 2 is to get the phaser, but really it was because he pushed the button for the engines on level 1 and triggered the bug (which moves the guards to the planet). The real way to get rid of the guards is to shoot all of them with the phaser. The phaser only self-destructs on the planet after you've done all the necessary shooting on the ship. There were also problems with beaming routines, that allowed you to beam down without Spock being present, but which indicate that he is present by the messages displayed. There were also some problems with how the score was accumulated. 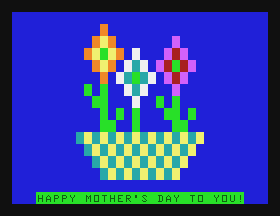 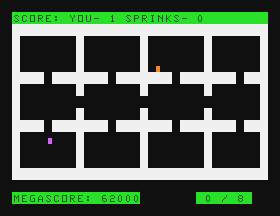 Galaxy Trek Adventure Addendum August 2022
I worked on condensing the code of Galaxy Trek Adventure #2 by Howard Batie. Now both programs fit into memory as a single program without any requirement to load an additional data file. I also did some renaming of the files:
Galaxy Trek #1 is called GALTREK
Galaxy Trek #2 is called GALADV2  but you can also load and run a file GALADV, which will print some background story for the adventure and then prompt you to load and run GALADV2.
Here's a complete walkthrough of the condensed version of Galaxy Trek #2:
More info about these adventures can be found here:
http://solutionarchive.com/game/id%2C5142/Galaxy+Trek+Adventure.html
and here:
http://solutionarchive.com/game/id%2C7188/Galaxy+Trek+Adventure+2.html
Posted by jgerrie at 06:21 No comments:

4 Mile Island Adventure, not to be confused by another Basic adventure for a recent programming contest (in the 2000s) of the same name, was a text adventure made by Owls Nest Software for TRS-80 Color Computer and MC-10 in 1983. Ported the Coco version to MC-10. Made some changes in the save game routine. In addition to the object list of locations, it now also saves the following variables:
F,G,CF,TB,GB,CA (# of objects being carried), RT (reactor temperature), YO (present location), DO,NOT,DR,M
This means that you don't start fresh every time you save and re-load a game, which makes the game more challenging (as there is a countdown to meltdown).

Brief Outline:
The 'impossible' has happened! This area was devastated by a severe earthquake. The reactor has been severely damaged. The plant has been deserted. Only you can save the area from a major disaster! Your goal is to achieve a cold shutdown of the reactor at Four Mile Island. Alternative? Death!