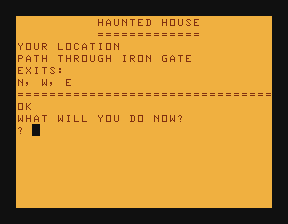 This is a text adventure called "Haunted House." You explore the house and collect treasures.

I have ported the game to the TRS-80 MC-10.  The original is from a book called Write Your Own Adventure Programs For Your Microcomputer, which you can read here.


The program was part of a 1980s series of programming books for children from the Usborne publishing company. That company has posted PDFs of all their books from the programming series.  I highly recommend introducing them to your children if they have any interest in coding. Usborne also have modern programming books, including ones for Scratch and Python!

The adventure games book shows how to design and implement a text adventure game in BASIC.  The Haunted House game is the main example. The book is clearly written, consice and well illustrated, and assumes almost no prior programming knowledge. It uses BASIC, but the concepts are useful for modern languages.

If you find yourself frustrated, a walkthrough can be found on the CASA Solution archive.

The source code for my port can be found here: https://github.com/jggames/trs80mc10/tree/master/quicktype/Text%20Adventures/HHouse


Recently I became aware of Steven Wozniak's short time working for Atari to create the major arcade hit "Breakout." I hadn't realized that this experience was in part what led him to design the Apple II. He wanted to be able to create games just using software rather than huge numbers of ICs. No surprise that when he got the Apple 1 working and finished making a BASIC for it (called "integer Basic" but originally called "Game Basic") that he programmed a simple version of Breakout out called "Little Brick Out." It was really hard finding source code for the game, which is surprising considering the influence of it. There are thousands of versions of Breakout programs out there, but they can all trace their origins to Atari Breakout and Woz's program.

I eventually gave up trying to find a copy of it and some way to run it on an emulator. Instead I turned to the MC-10's implementation of the Breakout concept in the form of one of the programs for Tandy's "Game Pack" for the MC-10. These games were examples of the fewer than a dozen official programs released for the machine. It is not a very good program. It is slow. The paddle doesn't move quickly enough, so sometimes it is impossible for you to move it to the ball in time causing you to lose a ball through no fault of your own.This is a terrible sin for a game to commit. I decided to apply some of the tricks that I've developed over the last decade to speed up program execution. Carlos Camacho calls these my "black magic" tricks. Here's an incomplete list:

I applied many of these to BREAKOUT for the MC-10. I renamed my version BRICKOUT in honour of Woz's original program. Now the paddle moves twice as fast as the original. But if you lightly tap the keys you can still make the paddle move one pixel at a time for fine tuning. I changed the way the number of balls is reported to a countdown to 0 rather than expecting the player to simply know that you get 5 balls. I added a few instructions and a title screen. I also added performance assessment messages at the end of the game, which I had noticed were a part of the Woz's original version. I made a few other minor cosmetic changes as well.


I was inspired by some of Woz's enthusiasm, which is well on display here: