I began making Dungeon Crawl just before Christmas 2012. I had always wanted to have a 3D first person dungeon game for my MC-10. I essentially had Dungeons of Daggorath envy. However,  the best I could do as a kid was to type in the CAVE HUNT from Rainbow magazine.  It was a very simple text dungeon crawler. When I re-started my MC-10 hobby, I tried to improve on the simple text descriptions with some simple VDG wall graphics and characters based on "pixel art" examples I found on Google images.

This is a "cave bear!"  So I had a 3D dungeon crawler, but the game player was very simple.  I wanted something more like the original DND I had played as a kid.  I had already tried to make such a game in my DUNGEON game.  In fact, that game very closely applies the rules of the original Basic D&D, including the creation of a multiplayer party with a variety of races and spells, etc.  However, all those complex rules ate up memory and only left space for a simple overhead view of the dungeon. 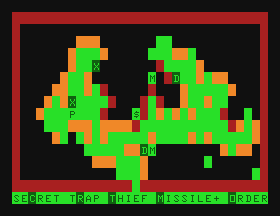 In the picture above "P" is your party and "D" is a door.  The orange and red blocks are walls.  I liked this game for its fidelity to D&D's rich rule set, but not its graphics.  I had really wanted to try to create something closer to the Daggorath experience.  Finally, after some reflection I realized I could probably create a simple but doable 3D perspective in the 20k of an MC-10 by limiting myself only to two blocks of distance from the character, instead of the complex long distance perspectives, such as are rendered (thanks to the nice machine language line-draw routine provided by Greg Dionne) in my port of the Rainbow mag CoCo game RATMAZE to the MC-10s 64X48 graphic mode:

The result was an cross between all three of the above, which I call DUNGEON CRAWL.  It has the characters of CAVE, some of the complex combat and magic of DUNGEON and a 3D perspective closer to that of RATMAZE:

You can find the instructions and version history listed below.  Crawl can be downloaded here:
http://rsp.retrocomputacion.com/games-dungeon-crawl-by-jim-gerrie/

The dungeon is dim and your torch only casts a little light.  It can be hard to distinguish things in the dungeon.  Objects only appear as light blue blobs.  Monsters can easily be mistaken.  In the flickering light you only catch glimpses of colour and the dim outlines of what appear to be faces.  Shadows easily create the illusion of threatening human forms, even when the reality is much different.  So beware, your eyes can deceive you.  You will find in the dungeon more than a dozen monsters.  Their "colours" range from green to blue to red to cyan to purple to to white to orange.  Some are (essentially) harmless like the deer that have wandered into the dungeon and become trapped, others are less so.  Deer (orange) can be eaten for health, but don't try to eat any of the other creatures!  In fact they will be trying to eat you!  So you must learn to recognize their distinctive colours and powers and avoid combat whenever necessary.  That being said, monsters (but not all) often carry useful items, which they will drop when defeated, so combat can sometimes be useful.

In order to defeat the pit fiend you must build up your cash of powerful weapons.  You must also keep your health up, although 100 is the maximum.  In the dungeon you will find magic items that will allow you to cast powerful spells to harm attacking creatures.  Like your health, your maximum when it comes to magical power is 100.  When you use magic against a monster you can cause up to 25 points of damage, but you will lose whatever amount of damage you cause from your magical power.

Magic can be used like any weapon.  It can be cast at figures in the distance, just like you would shoot an arrow (which you must also collect).  However, be warned, once shot at, monsters will immediately attack, and you only have a 50/50 chance of hitting them.  If you do, you will do up to 6 damage for an arrow or 25 for magic.  Once a monster is in your square, regular combat will ensue.  You always get to strike first (after all you're a professional warrior and mage!)  However, if you wish to flee a combat you must turn from your enemy as many times that are necessary to make your escape.  Each turn spent moving is a turn you are open to attack by your enemy. So be careful when attacking creatures down blank hallways. You can push past creatures in one move, but you might find yourself trapped!  There is also a chance that the creature will follow.  It depends on their speed and inclinations.  Each creature is different in terms of speed and inclination to pursue.

Different weapons have different powers, but all weapons can break in combat.  So collect up to three of the most powerful weapons you can.  Shields come in different strengths, but since they can never be broken, you will automatically keep the most powerful that you find.

You have one special form of magic.  If you are facing an interior wall and have more than 25 of magical power, you can choose the magic option, and you will be given the chance to blast the wall in front of you to smithereens.  This can be useful to gain access to parts of the dungeon that might be cut off from the
main areas of the dungeon.  You should, however, never be cut off from ladders going between levels or the pit fiend himself, who resides somewhere on the bottom level.  Find him and defeat him!

To save a game use the "P" key.  When your tape is ready press "S" to begin the save process.  In the emulator, you will be prompted to save the file to your hard disk.  The program uses a single standard file name, but if using the emulator, feel free to change the default file name to anything you wish.  After saving is completed you will have to re-run the program and answer "Y" to the "LOAD PREVIOUS" prompt to re-load your saved game.  Then press play on your tape player, or select the file name you saved a game under from the "play cassette" option of the File menu.

Versions 1-4
Created the characters, the 3-D engine and the mini-map.

Versions 10-11
Buffed up the user interface and got the mini-map reveal running.

Versions 12-16
Added the game save routine and intro screen.  Spent a lot of time condensing the code as I was down to a few hundred bytes, which sometimes led to OM errors.  Think I have condensed the program enough, so these shouldn't occur but please contact me if they do! Please contact me also about your thoughts on the  balance of powers versus those of the monsters.  This may still need fine-tuning.

Version 17
Fixed a spelling error in the intro screen and tightened up the code a little bit more to ensure there is adequate spare memory so as to ensure no OM (Out of Memory) error will occur.  Fixed the end routine so that whatever creature is killed last will be erased from the screen (in symbolic recognition of your victory).  It's the best I code do in the limited memory...

Version 18
Fixed a bug where your weapon could break even if you were attacking with magic.