Stumbled upon a neat article on the site "Hard Core Gaming" discussing the game "Catrap", for the Game Boy, which the author of the article insisted was based on one of the "great basic games" of the early 1980s.

I think I had actually searched on "great basic games", which is probably why I found it.  One of the "goals" of my hobby is to try to bring to the MC-10 as many of the great/most classic basic games of the 8-bit era as I can.  So I was interested to see that the game didn't look overly complex in its screen graphics:


In fact that "neon" green screen on the right hand side looked faintly VDGish.  It looked like a good prospect for a port.  Of course, it was not going to be quite that simple. Originally created in 1985 on a MZ-700 home computer by Yutaka Isokawa. The BASIC listing was published in the August 1985 issue of the magazine "Oh!MZ Publications," which hard core gamer had luckily been able to secure a scan of.  However, it was not a very good scan and the original language was quite an esoteric version of Basic, which didn't use data statements, but instead read data from a special file. Things didn't look good, but I decided to do a little further searching, and eventually I was able to uncover a French version of the same game (thank goodness again for my old highschool French), in a different version of Basic that did use DATA statements to store the 50 levels.

The original game was called "Pitman" and it is essentially a puzzle solving adventure game similar in style to Sokoban (which I have created a version for the MC-10 using the screens transferred from an OS9 text version made for the Coco that I got from the old RTSI OS9 software archive): 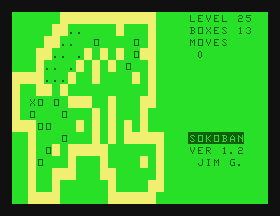 Pitman was very nicely programmed by Isokawa and only used the 40*24 text graphic characters of the MZ700. The original graphics were based on the use of 3X3 characters.  By reducing these to 2X2 character VDG graphic equivalents, I was able to adjust the game to the much smaller MC-10 32*16 screen.  Then it was just a matter of making sure all "scaling" factors used in the program were adjusted to the new regime.  The game also included level editor and save/load functions, which I have now fully implemented for use on both an MC-10 cassette system and Coco disk system.

Obviously the MC-10 graphics are a little more chunky than the original, but as a dedicated MC-10er, I have come to revel in the glorious chunky graphics of my favourite 8-bit machine.  After all, the visible squarish pixel is the very symbol and essence of "8-bit."  And in that regard, the MC-10 is king!

I have added the latest version of Coco Pitman to my JGGAMES5.DSK, which is available from my GitHub site: https://github.com/jggames

I've updated the title page to look more like the original and added disk directory and save features to the screen editing section of program.