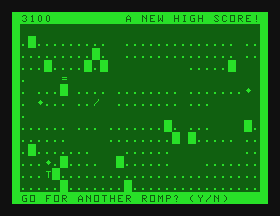 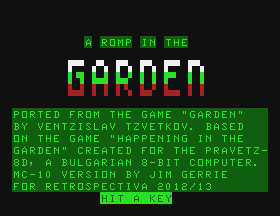 Noticed a couple of videos of the game "Garden" on YouTube by a Bulgarian programmer (hence the colors chosen for the title screen). See:


The concept was simple enough that it seemed possible to convert to MC-10 basic.  The basic idea seemed to be that the player's character is some yob romping around someones garden, crushing the grass and picking the flowers.  In the original, it is the garden's owner who is chasing the player, which is conceivably why the owner avoids stomping on the grass, but only follows along the pathways created by the player.  Due to the limitations of the MC-10 character set I decided to make the enemy a snapping dog figure using the <=> characters.  Conceivably, in my version, the dogs have been trained somehow not to stomp the grass, hence their tendency to only follow the player's path.

Versions 1-8
Took a while to create an algorithm for the dogs' movement that was similar in effect to the original and also challenging.

Basically the algorithm checks each time the dog reaches an intersection with at least 3 passages leading off it.  Then it changes direction from the current one, to one that tracks your character.  If it reaches any impasses it chooses a new random direction and heads off.  There is a random selection every 30 or so moves to simply change direction randomly or choose a new direction based on tracking (either horizontal or vertical).

Version 9
Added the "bone" feature, which allows the player to create passages that can be used to lure the dog into finding the bone "/".  When it does, the player scores 250 points and that dog stops for good at the bone.  When that happens, a new dog is released from the top left.  The player should avoid the stationary dog, as touching it is deadly. Perhaps the player is Homer Simpson (hee hee hee), and the owner of the garden as Mr. Burns (RELEASE THE HOUNDS!)

Version 10
Fixed the capture routine so that the dog gets to chew on you a bit before the game ends (it deserves that much, after so much hard work).  Changed the grammar of the end prompt from "Take another romp?" to "Go for another romp". I was thinking of "take another walk", but I realized that in English the normal phrase would be to say "go for a romp."  Added a randomize peek at the beginning of the program, so that it doesn't start the same way when the program is run from a cold start.  Fixed the screen creation routine so that a bone will appear for every new screen.