Jerry Young on the MC-10 Facebook group page (I think, or maybe on the Yahoo group) suggested a while back that Atari's Adventure would be a great project for recreating on the MC-10 in BASIC because of the simplicity of its graphics and gameplay. His suggestion has been in the back of mind ever since, so I decided to try to get a variation working for this Autumn's RetroChallenge. I have the maps worked up and tested (somewhat). No combat or items yet. I will be posting updates here throughout the month. I'm hoping Jerry might be willing to come in on the project as a expert consultant on the Atari 2600 console and the game play of the original. 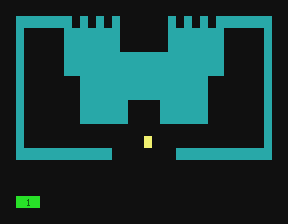 While wandering the net I found a post on Bjars.com and AtariAge about a game called Indenture, which is a DOS based Adventure game written by Craig Pell in 1995-1996 based on Adventure. The nice thing I noticed was that Pell had turned all the maps of the original into ASCII text listings in his source code. Looked a bit weird when I loaded it up into Wordpad: 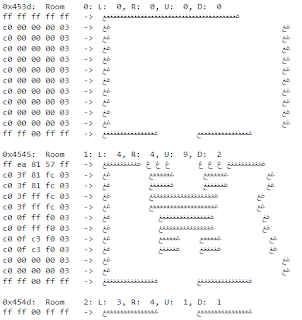 Transferring it to Notepad and saving it as pure ASCII text cleaned it up. The rooms were formatted for an 40 column screen so I had to do some narrowing. Most of the vertical walls were two characters thick, so I just had to cut these in half. If I could do that 8 times I had a screen that would now fit on the MC-10. Then I just had to make sure that screens that attached were thinned in a similar way so that all connecting passages lined up.

The source I borrowed from contained many additional rooms. Had to do some research to find out what rooms were needed for the original game. There are only 0-31, as far as I can determine, including the famous "easter egg" screen (and an apparently unused room 21). Then I had to compress the images by replacing common strings with variables. This brought the size of the program down quite a bit.

I should have lots of space now for adding some combat routines.  Not sure if I will slavishly follow the original, or try something a little different for combat. I'm thinking some kind of arrow shooting routine might be nice, rather than the simple sword thrust. The graphics for the characters will also probably be a little chunkier, but we'll see. At one point in the past I was thinking of these: 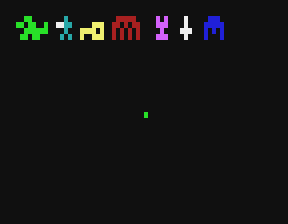 But with the maps I have, I think these images will be too large to be workable, but we'll see. I might just use something like these for the dragons and the bat (and sword or key):

I think I will use a simple block for the main character and possibly some ASCII text characters for items, such as a "Y" for the chalice. Not sure how I am going to handle the bridge or the "micro dot" that unlocks the easter egg.  So much to be done, such as adding color to the maps. Here's a vid of some simple testing of the maps:


Have a fun RetroChallenge everyone!
Posted by jgerrie at 19:57