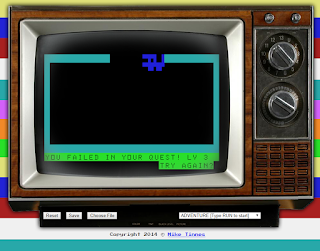 So the more I thought about it, the more I realized that the game really did need a way to lose.  So I modified it so that you have three respawns from being eaten, but then failure. I also found some more efficiencies in the main avatar movement routine, so the motion is just that little bit faster and smoother.  Hope I haven't introduced any novel bugs.  It's getting tedious to play to test every minor mod--the maps are getting pretty familiar and the novelty of exploration has worn off. Still, I need to do some more testing to fully determine if three respawns is the right number, or perhaps it should be that on the third strike you're out (i.e. just two respawns or three "lives"--there's something existential about reckoning "lives").

Also, I fixed a bug in the bat routine that was preventing it from disappearing after it swoops in and hits you.