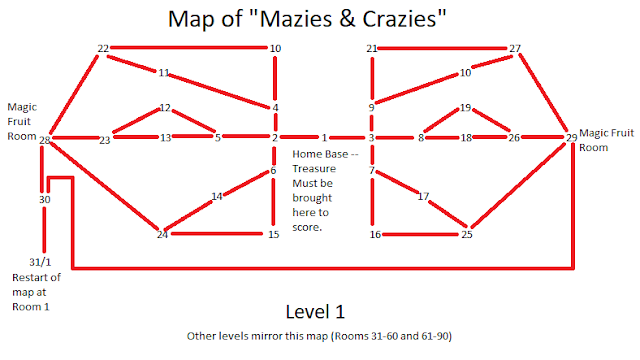 Here is the (somewhat sinister) map of the game Mazies & Crazies. In this update of my hand drawn map of my last post you can really discern the coherence of the underlying structure of DaCosta's game. This structure repeats itself 3 times. The map restarts at rooms 31 and 61, which are cognates of room 1.

Since room 1 doesn't allow a return through the top door because it has a pit trap going in that direction (i.e. the door is only one way from room 90), you can only get to room 90 by traversing the 3 levels. That makes room 90 an ideal place for a final boss battle.  So I have modified the program a little to provide this.  I have renamed the "DemiLich" monster I had been using to simply "Lich".  But in room 90 this character gets renamed "Demilich" and gets a bonus on its strength.  I also made the program put its highest ranked treasure in room 90. All other treasures and monsters only get distributed to rooms 4-89.

So now, you must seek the Demilich in its lair. This makes the game somewhat like the classic D&D dungeon adventure "The Tomb of Horrors" created by the legendary Gary Gygax. In keeping with ambiance of that adventure (if not its actual limited set of monsters), I have renamed the monsters yet again.  Here's  the current list in my version of Mazies: 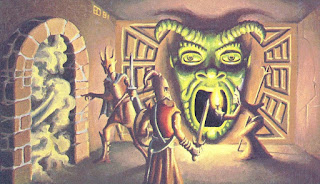 For those who don't know, a lich is an undead corpse of a powerful wizard. A demilich is the animated skull of an extremely powerful undead wizard who has gone beyond the need for the rest of his body. Great wizards usually became liches in order to continue their pursuit of magic and power beyond death. The boss of Tomb of Horrors is the Arch Demilich Acererak. He's pretty powerful, so you'll need to marshall your powers to be able to kill him in MC-10 Mazies. You'll need the shield (at least) to have a chance. Don't think the arrow will help, although it can't hurt. You might try getting the bomb and then try to lure him onto it, if you want to ensure victory.

I have also added a few more fixes and speedups to the program. The victory sound and the sound for the magic portal and pit trap have been improved. I fixed a bug that made the portal only take you to room 11. Now it will take you anywhere in dungeon except room 90.

I'm pretty sure that this program is pretty obscure, if not completely missing from the Net, by which I mean it doesn't have any playable copy available that I can find. My version of it is even more obscure again. But in case there are any hardcore fans of 8-bit BASIC RPG's out there, this is an adventure for you.

P.S. Added a listing for this game to the Wikipedia's List of role-playing video games: 1975 to 1985
P.S.S. I final read other chapters of the book, and discovered that DaCosta actually presents the map of the layout, so all my careful mapping was unnecessary.  Lesson: Don't just read the chapter about the source code.