I've moved to real MC-10 hardware and finally started to seriously play the game now that I've got (I hope) all the bugs out. I've been trying to apply some technique to play so that I don't just end up being killed. I have managed to penetrate all the way to the "end" of the dungeon. The room layout is not completely linear and is a bit convoluted, as you can see. Don't think this is from errors on my part.  There is a basic coherence. 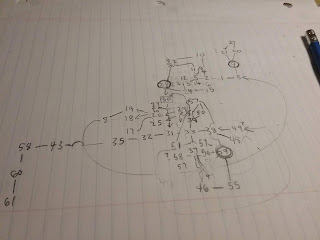 In brief, I think the maze consists of a basic plan of 1-30 rooms, which is repeated again 31-60 and 61 to 90.  I have made it to room 90 and returned to Room One, although I didn't explore most of the rooms in the 31-89 range.  As I noted in prior posts, I "corrected" the program so you can't go back from Room One to Room 90.  Don't know if that is another "error" introduced into the code on my part, but I don't think so, since the "pitfall" routine is called nowhere else, and its use makes the most sense in Room One.  It makes the game more exciting trying to figure out how to get to the higher numbered rooms and ultimately to Room 90. It is just silly to have room 90 accessible to Room One.

Perhaps DaCosta corrects the Room One-Room 90 bug somewhere in the text of the book as he discusses the program. Perhaps, he suggests that you correct it after having tested the higher levels by jumping to them directly from Room One. I don't know. I've only skimmed the chapter.  I'll go back and read it in more detail now. Perhaps, he wanted to give people a way to create a boss fight in room 90, and to be able to get there quickly for testing purposes. It's an example program afterall, so there are bound to be rough edges and opportunities designed to be filled in by the reader.

I can certainly think of some nice features to add.  Like I said, a boss fight of some kind in room 90 would be nice.  Some additional monsters from the core 8 would be nice too.  Different rooms for the levels 31-91 would be a possibility too, as there is no obvious technical reason for why they should repeat. It's certainly not to save memory, since they have their own data lines in the source code. One thing that would be really nice would be a game save feature. I think this should actually not be hard to implement since, almost everything of importance is held in one numeric array, and so should be able to be saved using CSAVE*L,"FILENAME" command of the MC-10.  Such possibilities are what I will explore next for RetroChallenge, if I have time.

I felt a little like a real pioneer exploring the Mazies maze.  It was a virtual space that possibly hasn't been explored by anyone in over 30 years.  Or maybe never, at least by anyone else than DaCosta.  If no one ever actually bothered to type the whole thing in, who knows, I might be the only one besides Da Costa, to have traversed it.
Posted by jgerrie at 21:44