I have been able to clean up the map I made last night (and wrote about in my prior post). There is definately a coherent structure, which my poor sketching skills pobably obscures a little. 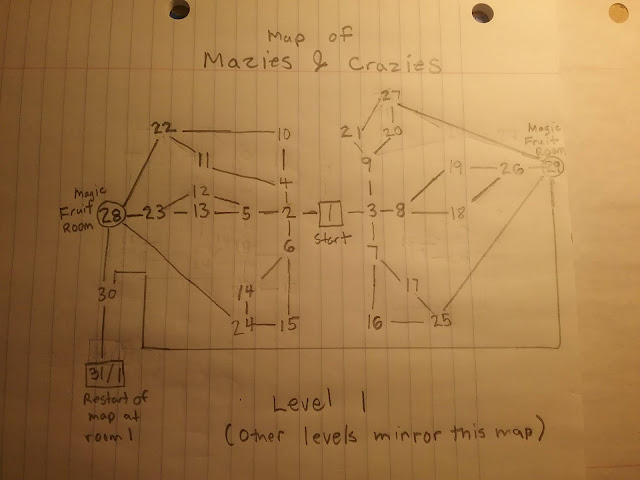 The other levels just repeat this basic map, with their "Room One" occuring at 31 and 61. Each of these can be looked at as different levels of the dungeon. So You could say that DaCosta has constructed a 3 level dungeon.  Room like room 30 on this first level leads back to Room One, but you cannot go back to room 90 because of the "pit trap" which prevents going that direction.

I think another line of possible improvement of the game would be to make each level's monsters harder than the prvious. Perhaps, this could be done simply by adding a number of more powerful monsters unique to succeeding levels and with a boss fight in room 90.  At the very least, I think I will add a "Lich King" to room 90.  Or perhaps I will change all the demilich's to just "lich"s and put the demilich as the final boss. This will make DaCosta's game a little more like one of the most famous dungeon campaigns (modules) of the classic game D&D, the infamous "Tomb of Horrors".

P.S. Corrected a bug today in the MC-10 version. I had used the "I" variable in the FOR/NEXT for my sound routine for the magic portal, that was also used by the portal routine for the room number of the random location you were to be sent to-- Result, you were always being sent to the same room number (the last number of the FOR/NEXT). Fixed it to use another "scratch" variable C.  Now you will be sent to a random location anywhere in the dungeon. I have uploaded a new version to all my storage locations.