I have started working on my major project for this month's RetroChallenge, which is the conversion of the program "Mazies and Crazies" by Frank DaCosta to the TRS-80 MC-10. This program was one of the example programs included in his book Writing BASIC Adventure Programs for the TRS-80 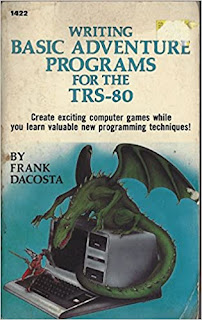 I have already converted his text adventure example program "Basements and Beasties" from this book.  Mazies is a RPG (Role Playing Game), with simple TRS-80 Model 1/3 monochrome block graphics.  You are the @ symbol and you must do combat with a range of beasts which are represented by at least the * character, as seen in the LANDCRAB attack below.


My first task was to get the source typed back in from a scan, which I have now completed. My second task is to get the source fully debugged on an emulator for the senior original TRS-80, see how the program works, and then convert it.  So far I have a basically working copy that has allowed me to explore these first few rooms. I'll have to do a whole bunch more debugging and exploring to make sure the program is a fully working condition.

My interest in this program was raised when I explored a post from a Hungarian blogger about early text adventures in that country and the influence of a translation of DaCosta's book for school computers (Commodore 16s I think).  I went looking for the two example programs on a few TRS-80 software sites, but couldn't find anywhere that had a working copy (i.e. as a file for loading into an emulator). So it might be a "missing program" for that system, which now exists only as a scan of the book.  A comment of by Matthew Reed of TRS-80.Org says it all:


The last three chapters of the book describe the design of a “graphic adventure”: a Rogue-like adventure named Mazies and Crazies. This game is somewhat less interesting (than the example text adventure program Basements and Beasties also included) from a modern point of view, although it is still interesting as a historical snapshot.

I'll keep you folks posted about my debugging process over this month (and apparently now also May) and hopefully the beginnings of the conversion process to the MC-10.