Found a really neat site listing Basic programs for the NEC PC-6001. One of the games called "Car Rally," written by Maiden Artist, looked liker a good prospect for porting or re-programming for the MC-10.  Apparently he had ported it from a Pocket Computer version of a classic arcade game Rally X rally.  It used semi-graphics 6 mode. 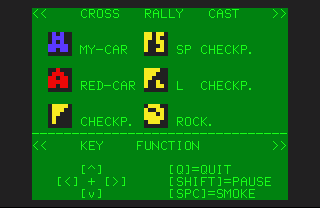 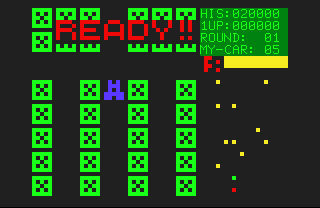 You must collect flags. 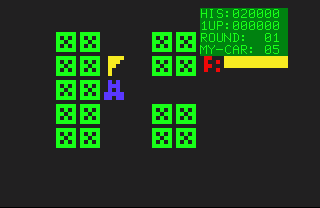 While avoiding an enemy car. 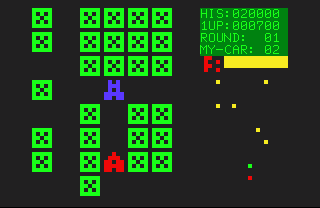 And watching the map on the right side of the screen that indicates where the flags are. 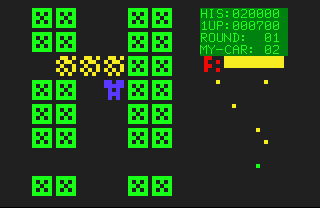 You can release smoke to block the enemy. 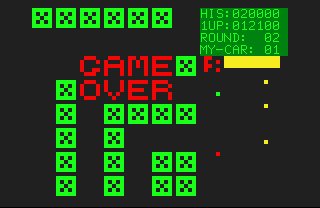 The game is over when the remaining fuel runs out. If you collect all the flags you can go to the next stage, but the number of enemy vehicles will increase.

I have been working on a version that uses strings for the map and the MID$ function to display the section you are. Its pretty speedy so far but I have yet to add the enemy care and its search algorithm. Hopefully I can keep the code tight enough to keep the speed up with the tracking added.  I'm going to use the VARPTR function to poke the obstacles directly into the map strings, and maybe even the moving enemy car too. Here was the test of concept:
Here is an update with the routines added to prevent hitting walls.
Next, enemy car tracking and collision detection.  The routines to randomly place flags in the maze and plot their locations on the little map.