I have finished porting two Greg Hassett adventures. "Atlantis" was ported from a Coco version. It was very buggy and the screen formatting was very weird. It also lacked save and restore routines. So I had to go back to the TRS-80 16K version and put them back in based on what I found in that source code. I have played it through using a walkthrough, so I hope it is pretty much bug free now. 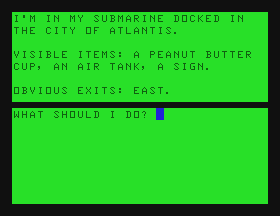 I also ported "Enchanted Island." I used source from TRS-80 16K source. Working on Atlantis had prepared me well for Hassett's programming style, so this conversion went very fast. 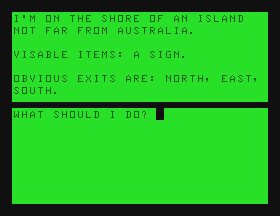 After completing these two adventures, I realized from internal advertising that Hassett displays in them that he had set of adventures.


59000 R1$="TRY SOME OTHER GREG HASSETT ADVENTURES: JOURNEY TO THE CENTER OF THE EARTH, THE HOUSE OF SEVEN GABLES"
59005 R2$="KING TUT'S TOMB, SORCERER'S CASTLE, VOYAGE TO ATLANTIS"

These messages get displayed at various occasions, such as when your character reads a newspaper, or at the end of the game. I realized that I had previously ported the others. So I went back and fixed them up to use a common visual aesthetic (eg. solid line demarcating main messages from input prompt). Now I have a set of six Hassett adventures: