A while back I ported "Ultimate Adventure" by Phil Edwardson from a version for the Dragon 32 computer. I think I was attracted by its name. If it was truly "the ultimate" adventure, I wanted a version of it for the MC-10. 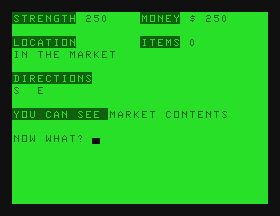 Unlike many of the adventures I have ported I couldn't find a walk-through by someone who had completed it to use to test for bugs. This was probably because this adventure contains a lot of random elements, including the location and effect of mysterious "portholes" that can transport you to different locations, but which can sometimes malfunction.

Although I was aware that the game had been distributed by Microdeal, a British company that did a bunch of ports of Coco software to Dragon, I wasn't aware that it was part of a five part series. That was until I got a message from Sudders on the Solutionarchive.com forum for classic text adventures.


"I'd just like to play the 5 games in this series. I think a couple that I have [that you made] are already ported."

It turned out that I had already done the "Adventure in Colonial Williamsburg" along with "Ultimate Adventure." Sudders was interested in the Mansion, Jerusalem and Castle Dracula adventures that were also a part of the series. In looking into it further I discovered that many of them had been published first in CLOAD Magazine and were only later licensed and distributed by Microdeal and numbered as follows:

I was able to find the Dragon version of "Jeruslalem Adventure" and using the XROAR emulator LLIST a text version of it to a file on my PC. Here's the batch file I use to run XROAR so that its printer output (such as LLISTing) goes to a text file:

The standard routine for porting text adventures from Coco or Dragon involves getting rid of ELSE commands and replacing them with different Basic structures. For example a typical ELSE command like this:
10 IF A<B THEN 50 ELSE 60

Notice that all the spaces are removed to help conserve memory. Structures like this are tougher:
10 IF A<B THEN A=A+1 ELSE B=B+1:C=C+1

This later variation can be particularly useful if you are hard pressed for extra line numbers. This later problem can be eased by using the RENUM command before exporting the original program to a text file.

The next step in porting an adventure is to make sure all the program lines are under 128 characters long. I just adjust my text editor to a window width that indicates where this break is. The process usually only requires breaking lines at a colon and putting the rest on a new line. However if the line is a super long IF statement you might need to create an IF that calls a subroutine at the end of the program where the various commands after the THEN can be broken into separate lines.

Of course POKES and PEEKS to screen memory have to be shifted from 1024 to the 16384 screen start address of the MC-10. I also like to use my simple 2 line word-wrap routine to replace any PRINT statements that might have strings that are longer than the 32 character screen. I often spend a bit of time weeding out such possible lines, or sometimes I just replace almost all the PRINT statements with a call to my subroutine. This involves assigning the string to M$ and then GOSUBing 1. Line 1 is where I usually stick the word-wrap routine. I have created a macro in MS word to help with this process.

The final stage involves cleaning up possible preexisting bugs in the program (which I sometimes discover), spelling mistakes and adding features just for the hell of it. For example, sometimes adding the function of using just N,S,E,W characters by themselves for movement is nice if the program requires full "GO WEST" etc. commands.

In the case of Jerusalem adventure, one aspect that I wanted to "fix" was its portrayal of "ARABS." If you wander out of the Jewish quarter, for example, you get attacked and killed by "an Arab." The instructions originally stated:


"YOU MUST EXPLORE THE CITY WHILE OUT-MANEUVERING ARABS THAT(sic) WILL KILL YOU IF YOU COME INTO THEIR QUARTER OF THE CITY."

In the age of Trump, I didn't want to contribute to the stereotyping of a group or to the oversimplification of the conflict between Palestinians and Israelis. So I added a graphic title page to acknowledge this conflict. I also changed the instructions to identify the main character as an Israeli. Now, if you wander into East Jerusalem you find yourself "in the middle of the Intifada" and get "hit on the head by a stone," which ends your adventure.

I couldn't find a copy of Castle Dracula in the Coco or Dragon archives so I had to get a copy of it for the Commodore 16. Then using the WinVICE emulator I listed the program to a text file on my PC. Here are the instructions I consult to remind me how to do this under WinVICE:

Because of the 40 column screen width of the Commodore, replacing PRINT statements with a call to my word-wrap routine is especially important. I also added a "background story" introduction screen. This was likely supplied by the original accompanying magazine article or instructions that came with the tape from Microdeal, but it's a useful addition for those who might only come across the game as a tape file for the VMC10 emulator.  Here is that introduction as it appear in the program along with my word-wrap routine (lines 1-2) that formats it for the 32 character screen:

Castle Dracula used a special line input subroutine that created a funky cursor. Turns out that cursor can be easily reproduced on the MC-10 with a simple POKE17026,3. So I added this cursor to all five adventures to provide a visible cue of their membership in the 5 part adventure series by Microdeal.