This game was originally published as a type-in program for the Commodore 64. The book was Mind Moves--Strategy Brain Games for the Commodore 64 and it was published in 1984 by Dilithium Press. The authors and programmers were Phil Feldman & Tom Rugg. It was John W. Linville our illustrious contest host who provided the impetus for the port. He knew I share his interest in type-in books and magazines and sent me a link to a PDF of the book. Areojam was the first program listed in the index. It looked like a lot of fun and a good prospect for a port.


Bridge to sector traffic controller. Entering control territory. Do you read? Request permission to dock  Do you read?

In the game you are a futuristic "air traffic controller" in charge of multiple spacecraft traveling through a busy spaceflight corridor. You command these ships from your control console. Action is fast. You must make quick and accurate decisions to get everyone through safely and efficiently. Here are the rules as described in the book:


RULES
The action takes place on a major east/west artery with traffic flowing in both directions. (It's not clear that compass directions like east and west have meaning here in outer space but, what the heck, we claim poetic license.) Spacecraft enter from either end, must stop for refueling at the south-central dock, and exit at the opposite end from where they entered.

There are two classes of ships-- manned craft (yellow and green) and drones (blue and red). It's particularly important that you process the manned ships efficiently. The playing field is subdivided into square sectors. Only one ship can be in any sector at a time.

You command each ship's direction of movement (Space Bar). When you feel all are oriented properly, it's time to issue the movement command (Enter key). However, you have only a limited time to do this. The ever-present clock on your console ticks away. You must issue a movement command within a prescribed time, or one will be issued automatically. (After all, spacecraft can't just sit around for too long.)

New ships enter the arena regularly. The expected arrival time of the next ship is shown on your console so you can plan for it if you have the time to check. After docking for refueling, each craft must leave in its intended direction through a proper corridor. So you have to position ships correctly for exit too.

If things get too cluttered, you can zap a ship (D Key) from your territory as a last resort (no telling where it goes). This is a costly option, but it sometimes is necessary to avoid worsening problems. It also leaves space debris where the ship was, rendering that square dangerous for awhile. This is particularly troublesome near the dock, since all ships must pass through that region.

Speaking of space debris, that junk can also appear randomly. It must be the funny weather in space. Needless to say, a ship-to-ship collision is big trouble. We  can hardly bear to talk about it. If a manned ship is involved, there goes your promotion.

To move the cursor (a reverse asterisk) you use the regular WASZ MC-10 direction keys. Hitting the Space Bar rotates the ship your cursor is over. When you have all of them rotated the way you want you can issue the move command by hitting the Enter key, or wait until it is triggered automatically. However, it is to your advantage not to waste time as this is reflected in your score.

The game made extensive use of the TIMER function built into most Microsoft versions of basic but unfortunately not included in Micro Color Basic. So I put out a call to the machine language coders in the MC-10 Yahoo group for someone to create a functional equivalent as a USR routine. Darren Atkinson responded with a wonderful little M/L timer function that mimics the functionality of TIMER. Thanks Darren!  He saved a version of it in the UTILS directory of my "G-Soft" files directory on Yahoo.


Besides that hurtle it was a fairly straightforward port. I just had figure out the somewhat bizarre Commodore system of rendering graphics on the screen and translate these into roughly equivalent shapes using the lowres graphic characters of the Motorola 6847 chip. Of course getting all of it to fit on a 32X16 screen versus the 40X24 screen of the 64 took some adjustment, but I think it came out pretty well: 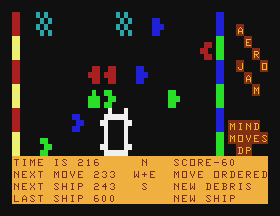 Here is the original again for comparison: 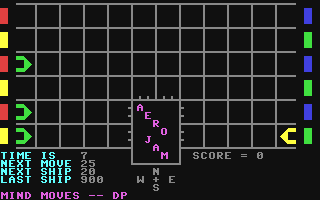 The nifty grid is absent, but I don't think its particularly necessary. Otherwise, all the other messages have been jammed into the lower 4 lines of the MC-10's screen. The space station with its docking ports for refueling is the white square at the bottom of the main display. You can see how the ships look more solid when they have a load of fuel.

So thanks gain to John for the suggestion and to Darren for the M/L TIMER function for the MC-10. Here's a video of the game doing its thing: