Curse of the Undead

I know that what I mostly do is port old code from around the Net to the MC-10. But occasionally I feel the urge to make something new. I got the inspiration for my game "Curse of the Undead" by stumbling across a website that had these two interesting images drawn using just text graphics. 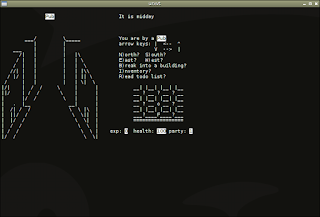 I'm attracted to such images because their ASCII text graphics can often be easily translated into lowres graphic images on the MC-10. With that in mind I set out to make some simple graphic streetscapes like those in this Linux text game described as "Your 3D Zombie Apocalypse in ASCII!" The author offers a zombie apocalypse adventure for the Linux console. Apparently he dubbed it “Curses of the Undead” because it used the standard ncurses library used for manipulating the console screen under Unix systems,

The game play sounded very simple with the player basically just responding to a sequence of decision prompts as he navigated a section of town being swarmed by zombies. After I got the street scapes drawn, I though I would try to cobble together a simple 3D engine that would allow you to navigate the streets of a city on your MC-10. I've worked on a number of 3D systems now for ports and original program, so I'm familiar with the basic principles for plotting your view based on the direction you are facing. It came together pretty quickly. Then I had to make some kind of game out of it. I had a number of standard simple zombie swarming text games, where the player gets two moves for the every one move of a bunch of simple X/Y coordinate tracking zombies.

One thing I had always thought about such games was that they were always a little short. It usually didn't take long for you to trick the zombies to track into whatever obstacles were spread around meant to kill them (the white blocks in the above). I thought it might be nice to extend this kind of play by placing it in a virtual setting, so that one had to succeed at a sequence of encounters.  And adding some animation and perhaps a weapon or two to spice things up a little would be nice too.

So I translated the game play of these standard zombie tracker games to the different street locations you move to using the 3-D engine. You must destroy a total of 60 zombies spread randomly throughout your neighbourhood to rid it of the zombie menace. To aid you, I also have supplied your character with a shotgun, but it only comes with 3 bullets initially. You must find more ammo as you move around. I also animated the fires that you can lure the zombies into to destroy them. But beware of hitting these fires yourself because they can cause you injury. Three brushes with the flame and you will join the zombies in death, but not the still mobile kind.


You might notice in this early version of the game that one mistake I made was listing how many zombies you had "killed" at the end of each game. Oops. Changed that to "destroyed" in the final version.  Don't want to mess with the classic "guilt free" destruction that lies at the heart of the zombie motif.  No live people were harmed in the making of this game!