It's that time of the year when I turn my attention to converting some of my MC-10 BASIC programs into Coco and Dragon 32 programs. Diego Barizo has added some impetus for this task by way of his 2020 Asimov Awards. In past years he has held the contest at the Chicago Annual Last CocoFest. I hope someday to be able to attend a Fest. Until then, sending my programs to Diego will have to suffice. It's a little bit of virtual participation.

This year I have collected together some programs I have been working on most recently on the MC-10. All of them were in somewhat unfinished states. My puzzle game SolChess is based on a popular smartphone puzzle game and also real chess board game, "Chess Solitaire."  Here's the board game: 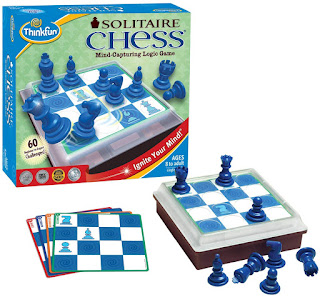 It's a lovely little game. My version has 40 of the standard puzzles. However, the game was completely silent and I had always planned to have some musical refrains for success and failure. So when my son Charlie came home for his midterm study break I availed myself of his musical skills.  He put together two Russian tunes, since that country seems especially connected to Chess.


For a lark I also translated a brief little joke quiz game with silly MC-10 questions. It's called "QuizNite" and the graphic of the title screen is borrowed from a similar image from some kind of activity in honour of the Dragon 32 held in the UK. The approach to getting the questions right is to look for the answers that are the most unlike the others, most silly, downright false, or some combination thereof. Only the true masters of MC-10 will succeed first time.


The other entries are arcade games. My Space Mouse game was inspired by a classic arcade game for the Japanese 8-bit NEC PC-6001. As I have investigated that game further I realized that the premise of the game is that you are supposed to be a cat climbing a tower infested by invading space mice. I must have interpreted some Google translated Japanese website info incorrectly (perhaps the use of the singular "mouse" in the translated title confused me into thinking a mouse was the central character). In my version, you are the mouse and you are climbing a launch tower in order to stow away on the rocket before it launches.  You must avoid the dangerous objects rolling down the power, which have been shaken loose by the pre-launch vibrations.

If you complete 20 screens you are rewarded with an nice animation of the rocket blasting off and disappearing off the top of the screen. My son Charlie got it after a couple of false starts, so I know it all works.  I was never good enough to successfully complete my own game on a full 20 stages.  After 10 stages a tone will sound and the maze will get a little tougher, with only two exists, instead of 3, for movement between each floor.


Another game is also from Japan. Manbiki Shounen or "Shoplifting boy" is a classic early Japanese BASIC game, which has been described as the first example of a "stealth game."  I had left this game a little unfinished. I needed to work out a better way to hide the bottom of the characters as they passed behind the shelves of the store in which all the action takes place. I needed to do this because unlike the NEC PC the coco and MC-10 don't have an extended character set for the MC-6847 VDG with line graphic characters. To get proper "legs" and "feet" I had to use the regular SG4 graphics, which required two lines to work, instead of one as in the original. I finally got this fixed up and also translated it to Coco Basic.

I also translated my version of "Elevator Action," a classic arcade cabinet game. Mine is a bit of a flicker-fest. The action is frenetic and there are some tricks that need to be mastered to avoid death, but with some persistence you can become the 007 of Coco Basic games. If you complete a number of buildings, you will be rewarded with a special message in honour of CocoFest. But I doubt if there are many with the fortitude to persist against the annoyances inherent to Basic arcade gaming. But if anyone does and can prove that they have done so. I will happily send them a trophy.

Another original game initiated this year was "Alpha Force." This was a development of a failed game called "Square Force."  Square Force was simply too slow. I figured out a better way to have the enemies track the player's character in a simple grid layout.  I took advantage of every possible way to reduce processing in the main loop. Finally, Charlie made some suggestions about adding some additional challenges, so now you must also collect randomly distributed plus signs for 10 points each. Every 100 points will earn you an extra life.  Since the shots move simultaneously as you and enemies move, there are times when your shots will skip hitting an oncoming enemy. There's no way to avoid this without a serious speed penalty, at least that I can figure out, so it is just a deficiency the player will have to work around in his or her play. Sometimes munitions fail, just like in real life!  But at least now you can win extra life back, so you can possibly go on forever.  But the enemies will also slowly get a little more ruthless in tracking you.

The collection is rounded out by my Christmas 2019 mini game "SANTA", which started as a simple animation of Saint Nick flying over house tops. However, it now involves a "reflex" gift dropping challenge. You will receive an assessment of your performance. Only the very best will be awarded the coveted "Super Santa" rating.

Finally, I included my most recent version of my port of Akalabeth from MCX Basic. I found an error while testing the Coco version as I prepared JGGAMES13.DSK. So if you have a version from my prior distribution of this program on JGGAMES12.DSK, replace it with this one.  The newest version of my JGGAMES.ZIP containing JGGAMES13.DSK is where I have now put all my work from 2019.

My entries for the BASIC 10-Liner Contest are as follows: SANTA, which is just the same as the Coco game above, but condensed; AINVADER, which is an extremely simple Space Invaders type game using string manipulation to move the invading force; and OUTHOUSE.


Outhouse was inspired by the wonderful artwork of Erico Patricio Monteiro using a SG4 64 by 32 pixel layout: 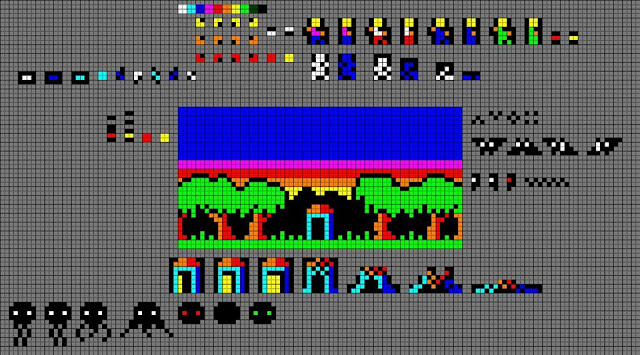 Erico really knows how to manipulate those chunky pixels into something magical. Alas, in 10 lines it would be impossible to take full advantage of his screen work, but I hope to apply his stuff in a more advanced version of the game. Here is a video of Outhouse: