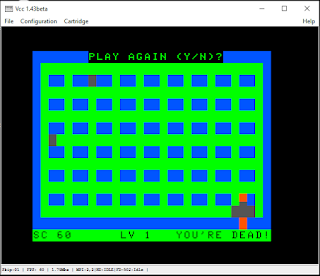 I made a few minor changes to Square Force to try to squeeze a few more microseconds of speed out of the main loop. As always, it's an exercise in futility,as the game will obviously be too slow for any serious gamers (like my son) raised on the adrenaline rush of modern consoles. However, for old farts like me, a nostalgic romp with a plodding type-in can be a pleasant way to while away a few minutes.

On an entirely different note, in the course of doing some painting in my home over the Christmas break I took down a sensor for an home security system (We've never used it and never intend to). I noticed that it is just about a perfect size and shape to cover my MCX attachment for the MC-10. My mind was jogged about this possibility by a recent post on the Coco mailing list by Ed (the Zippster):


MCX BASIC is an extension of the MC-10's Micro Color BASIC, including a number of additional commands and the ability to use Emcee server.

Emcee server lets you use directories on a PC or Mac as a virtual drive in order to store and run programs and data easily over a serial connection (same cable as you'd use for Drivewire).

The MCX-128 is another design by Darren Atkinson, creator of the CoCo SDC, and a great upgrade for the MC-10 Color Computer.

I just sawed a centimetre slot in the bottom and the MCX fit right in and easily plugged into the back of the MC-10. Now instead of an old plastic package for screws spray painted beige, I have what looks like a legitimate case from a computer peripheral manufacturer called DCS (the security company): 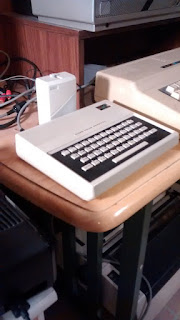