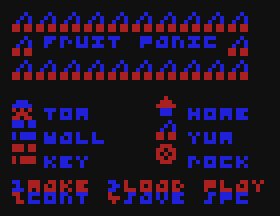 Well, this is my first post for the month long January Retrochallenge 2016. My goal is to document some recent programming projects of mine for the MC-10, specifically my efforts at final debugging and porting of these programs to the TRS-80 Coco and Dragon.  My most recent programs have been the following:


The ones with the + are ports from Basic code scavenged from the net in various ways.  The ones with * are programs the code I have completely (or substantially) written myself.  Some are rather minor basic programs, so I wont bother trying to transfer them to Coco and Dragon. I generally try to transfer only the programs I have written myself or ones that are more substantial and might actually be of interest to others. This principle reveals a basic divide in my hobby programming.

When it comes to the MC-10 the main goal of my retrocomputing hobby is to simply add as many Basic programs to the stable of those available for the machine as possible. This is motivated by a desire to overcome some of the neglect of the machine that occurred back when it was released and then orphaned by Tandy in 1983 and by my love of the early style of program distribution known as the "type-in." Since, the MC-10, as an orphan computer, never had a large software base, the majority of my experience as an early user was largely of trying to convert programs from the Coco and other systems from those published in magazines. A little later I got a modem and was able to get a few programs from that source.

Later I got my hands on a Coco, which was a more serious computer (my sister got it for university, but I had it for a summer). Then my computing allegiance shifted (somewhat) to the Coco and to higher levels of programming (BASIC09, C, Pascal).  So my experience with the Coco was really more about programming than just fooling around with "type-ins."

So I think, I will focus on porting ROADRACE, MINISTRY, FPANIC and 11ASTER to Coco and Dragon.  All of these programs are more substantial programs that are completely new to the Coco. Some of them required serious conversion work, such a Ministry, which was originally written in C.

I have a wish list of things to work on.
- I'd like to possibly ad a graphic element, like say a map depicting your empire, to Ministry and maybe some other simple graphic flourishes
-  and make a better win graphic to FPANIC (coco version)

I have already managed to port FPANIC to Coco, but there are some differences in how it handles the weird Semigraphic 6 video mode from how the MC-10 does that led me to cut out an elaborate win graphic to get it running in time for distribution on Christmas day (an arbitrary deadline). I also tweaked the MC-10 version's win routine, and would like to add those elements to the Coco version.

Anyway it's up and running in Dragon and Coco versions.  The Dragon version can be found on the Dragon archive site:
http://archive.worldofdragon.org/phpBB3/viewtopic.php?f=7&t=4760&start=60
The links to my own pages (hosted on my University's web site) are currently down for some reason, but I hope they will be brought back up as the new term starts. Until then, here's the link to the Github source for the MC-10 version:
https://github.com/jggames/trs80mc10/tree/master/quicktype/Puzzle/FPanic