Robert has really been working hard on BDASH game. I really like the BDASH016 version that he has created. His animation of the little "miner" character is a really nice touch. And the sound and visual effects he has contributed (the explosive flash and stepping noise) have really punched it up. And he's wedged in some instructions too! I think we must be approaching a definitive version for the 10-liner contest, if not finally reached it. Thanks Robert!

I have also been working on a new program for the contest called MINIDUNG. It's a graphic 3D first-person dungeon crawler, and all in 10 lines. Because of the limits of 10 lines the user interface has to be fairly primitive. You are basically limited to the INPUT command using numbers. So, for example, entering 1,2 in response to the MOVE,DIR prompt means "move 1 space in the 2 direction (i.e. West). Entering 0,2 means stand on the spot and simply turn West. Still it's not too bad. Here are some screen shots: 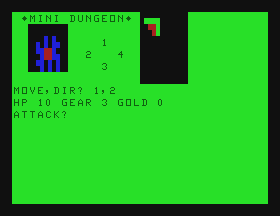 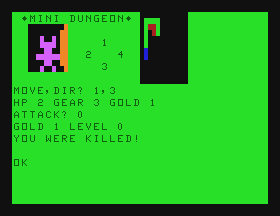 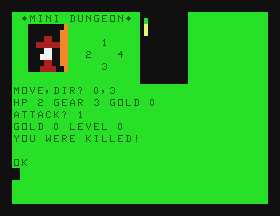 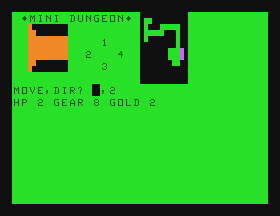 The 10X10 mini-map on the right slowly fills in as you explore. The little green blocks represent clear areas whereas the black blocks represent walls. Colours also will appear indicating the different monsters you run across as you explore. You can choose to fight them or run, but if you run there is still a reduced possibility of damage. There are 10 levels of play (more if you really want to try them). Here is the source: https://github.com/jggames/trs80mc10/tree/master/quicktype/Dungeon/MiniDung

Anyway, this is where you can download the VMC10.exe emulator, which has all my Basic programs in the JimG directory under the Cassette directory:
"Jim and Charlie's TRS-80 MC-10 Games"

This is also likely my last post for the 2016 January Retrochallenge.  Thanks to Mark Wickens and all the other participants for a month of fun and learning.