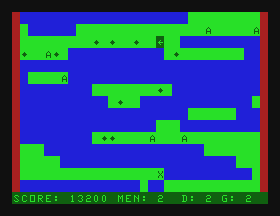 I've made a new platform game for the MC-10 and Coco called Tunnel Jumper.  I'd always wanted to make a platform game, but using VDG low-res graphics characters seemed likely to leave too little room for any really significant action or complex maps.  I was able to address this issue by reverting to old ASCII text graphics.  The "X" is your a character.  It is animated by rotating between the X and Y character, which gives a slight illusion of a man walking.  I've used this character in other games such as "Romp in the Garden."  The character can fire upwards (he has taken some kind of vertical drill from his captors), which destroys three character wide sections of the roof.  This allows the character, using carefully placed shots to carve "stairs", which will aid him/her in ascending through the mine to reach the top.  You can see some examples of such stairs in the following image.

The character can also jump by pressing the up arrow.  The jump is in the last direction of movement, or by pressing the "," or "." keys one can turn, without moving, to face a specific direction to jump next.  The character can scale up to two levels, if positioned correctly.  Sometimes parts of the ceiling will have to be blasted to make room for the arc of a desired jump.  Careful planning is required to carve stairs.  If one blasts incorrectly, it is possible to remove parts of the ceiling that are necessary for carving a path to the top of the level.   Since the levels are randomly generated, it is also possible that some will not provide enough ceiling material to carve stairs to the top.  To mitigate such possibilities you are also armed with a "spike ladder gun" which can create a four character high ladder to aid you in your climb and some drills for selectively removing sections of floor.  Pressing "G" fires the ladder gun straight up 4 characters high.  Pressing "D" drills down one character.  Don't drill too much or you can drill yourself into a hole too deep to jump out of.  You can also resign from a level by pressing "R", which will bump you back a level.  A number of additional drills and ladder guns are sprinkled throughout the mine.

There is a time limit for completing each of the 9 levels, so don't dawdle.  On levels 4-5 you can find copies of the alien's secret plans for destroying the human race.  If you can collect these, you will get a big point bonus.  If you complete all 9 levels of the mine, you also get a bonus.  If you escape and have collected one of the copies of the plans, you save the earth.  If you escape but do not get one of the copies of the plans, you merely save yourself.  Here's the final screen (i.e. level 10): 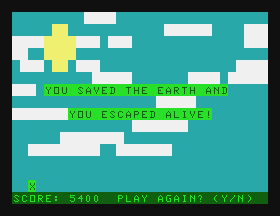 The game can be found on the Yahoo groups for the MC-10 and the Coco and on my personal web-page.  Any comments are much appreciated.
TRS80 MC10 Club
ColorComputer Group
Posted by jgerrie at 19:43