Okay.  I'm thinking about doing another Coco Coding contest entry.  As usual I'll start by coding it on the MC-10 and then make the conversion to the Coco if it seems worthwhile.  The idea I have is a for a looping plane shoot-em-up, which I'm tentatively calling "Night Blitz."  You will fly a blue plane which can loop and shoot in any of the 8 directions: 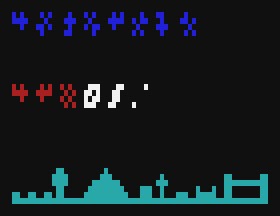 The title page will display a UK roundel.  The scenario I am thinking of is the night blitz on London.  The red planes (2-4 of them) will move back and forth across the screen bombing the cyan city buildings at the bottom of the screen.  You, in the blue plane, will have to pursue and shoot down the red planes while avoiding sporadic anti-aircraft explosings (white) and collisions.  You'll score points for each plane shot down.  Here's a sketch of the title screen: 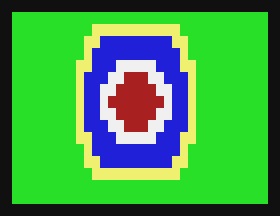 I recently made some changes to one of my older games "Rainbow Asteroids" to try to make it a wee bit faster. I changed the order of the declarations of the variables to put the most frequently called variable names at the front of the list. It should be a bit faster now and a little bit more challenging.  Please take a look at RROID3.TXT in the G-Soft software folder on the Yahoo group: 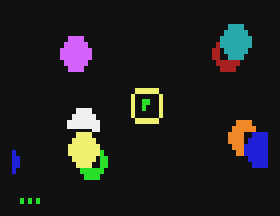 You can join the MC-10 group on Yahoo at:
http://tech.groups.yahoo.com/group/TRS80MC10Club/join
﻿