"Sunrise Over Bethselamine" by Armadillo Soft.

"Sunrise Over Bethselamine" is a text adventure program I have converted to the MC-10. I've made many bug fixes and spelling and grammar corrections.  There were sooooo many spelling and grammar mistakes I'd have to guess this program was written by a 13-year-old British kid.  However, it is officially attributed to Armadillo Soft with a release date of 1986, and apparently had a commercial release. 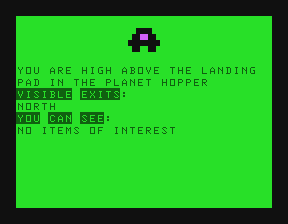 My interest in converting this game started with a comment by posted by boldir (Fri Jul 23, 2021 5:50 pm) over on CASA The Solution Archive.

"I'm currently playing this adventure and I have even fixed it, but nevertheless I get stuck when I have to use the comlink in order to get the code number for the terminal in the small computer room (37). When I PRESS BLACK inside the alien craft (having the comlink and the translator) the message "A voice comes from the comlink, the translator translate it for you, 'calling agent 29326'" should appear. Instead of this, the comlink says 'gargle gloop gleep glop zing. In this context there are two conditions I can't explain to myself: w=0/1 and ww=0/1 (see BASIC lines 663 => 955 and 1050 - 1070). Is there anybody who has any idea?"

My response was the following:

That's some messed up code.

Here's what I would recommend:

Basically this routine was supposed to be checking that you have both the Comlink and the translator when you push the button. If you don't have the Comlink, it was supposed to tell you that you don't have it. Or if you have the Comlink, but not the translator, it transmits a gibberish message. But if you have both, you get the message with the code number.  The problem is that the programmer uses multiple IF statements sandwiched between a FOR/NEXT loop, with the NEXT actually in one of those IFs, so it doesn't necessarily get triggered.  So the loop doesn't function properly.

My new version works. It disentangles the IFs from the FOR/NEXT loop and properly organizes the variable flags W and WW for signaling whether you have the translator and the Comlink.

"I think the problem lies deeper. It's not enough to get the comlink and the translator to receive the necessary message; I've noticed that the program (randomly?) swaps the collected objects, eg at room 15 (the apartment of the hotel receptionist) it happened that, when I dropped the glass cutter and took the comlink, the cutter was in this room when I looked again, but the inventory still shows the glass cutter, and the small box that I had before was gone! It has also happened that I had two laser pistols in my inventory, so I suspect that the comlink or the translator could be exchanged for another object without being noticed in the inventory. I have no idea what's going on here; I've played the adventure many times and only happened to get the correct message once although I've always owned comlink and translator."

I was able to find this problem as well.  There was simply an incorrect variable used in the loop used to reorder the "items carried list" after you use the Rope. That item needs to get removed from the items list once it is being used (i.e. dangling down the side of a building).  But the incorrect variable would simply corrupt the items list instead of reordering it after deleting the Rope item.

I made many fixes (but there are other minor one's I can't recall).  Here's a rough list:

I'm not sure exactly how the graphics worked. But guessing led me to have four basic graphic images for four main "stages" of the game.  When you (Jason) are exploring, you just see a human figure.  When you're in the "planet hopper" you see a little ship graphic.  When you hanging from the building, you see a figure with a rope.  And when you're using a "computer terminal" you see a little graphic of a computer and keyboard.  If anyone can enlighten me about the graphics in the original, it would be much appreciated.

For a complete listing of the code look for the highest numbered "SUNRISE" file here: https://github.com/jggames/trs80mc10/tr ... es/Sunrise