I have converted the program "Euchre for Two" Victor J. Raybaud to TRS-80 MC-10. It's from a listing in The Best of Creative Computing (Vol. 3, 1980). Originally for the Univac 1106, I had to debug it for Micro Color Basic operation. For example, it contains many uncompleted FOR/NEXT loops, which needed to be dealt with. Also, there was a recursive use of GOSUB. I suspect that the Univac could easily handle these techniques without problem, but they were causing hiccups for 8-bit Microsoft Basic. I also found some formatting bugs for the main card layout screen, which I also fixed. Or at least they seem like bugs, but perhaps there is some strange nuance to Univac Basic string formatting that somehow eluded me.

It was somewhat puzzling why I couldn't find  working version of this program that you can run in any of the regular online software repositories that I keep track of. I think that it is possible that the quirks of Univac Basic that I had to find work-arounds for might have frustrated enough people back in the day, that the program was unable to make the leap from the Univac to the 8-bit personal computer world. Lack of 8-bit distribution could easily prevent copies from surviving to the current day. It's a big complex program, that would be very intimidating to type in. The line numbers skip by 100s and have leading zeros, which adds to the intimidation factor. Coupled with the quirks, which would have been very frustrating to hunt down in the old line editor environment of the home machines of the day, and you have a perfect recipe for a "missing program."

It's sad that the game seems to have been lost, because it is a wonderful piece of early artificial intelligence programming.  It plays what appears to me to be a reasonable version of a complex card game.  There's bidding that requires predication. Some of your cards are hidden and some are displayed, which demands strategy to manage well. Like many of the programs of the Creative Computing crowd, it has an elegant simplicity to its user interface.  I typed it in with the idea of converting it to a new small graphic "card set" that I had developed recently: 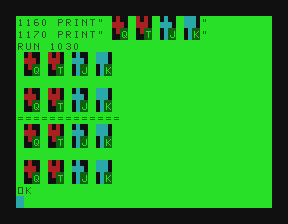 But in the end I didn't want to mess with the elegance of the original.  So perhaps on some other future card game project I'll find an opportunity to use the new graphic card set.

I've also been fiddling with another David Ahl/Creative Computing conversion. I did "Hockey" this week.  It's a simulation from David Ahl's 1978 collection. There were a number of typos, such as wrong line numbers and garbled variable names, in the TRS-80 source code that I worked from, which I corrected. There was also an error in the original source.  In the routine  that allows you to take a shot from the Red Line (i.e. no passing selected), the option 2 subroutine just bleeds into the option 3 routine, so that you would get both result messages.  Since most people would only select option 1 (slap shot), I suspect the original programmer didn't notice the problem in his debugging.

I had to use my word wrap routine for the messages, since the MC-10's screen is so confining, but I think it looks pretty good.  It plays like the transcript of an old fashioned radio broadcast commentary.

I am currently working on the Ahl card game "War." It's a very simple game, so there is not a lot of incentive to complete the project, but I'll get to it eventually.

I've also done a number of conversions from Australian Coco magazine, including "AUSMAP" which I blogged about last week.  But I also did a game called "Space Bar Bandit," which is a simple slot machine simulation:

I also spent a little time working on some variations of the classic 10PRINT program. I was inspired by Robin of 8-bit Show and Tell, who looked at a neat new "orthogonal" variation of the program created for the Commodore 64.  That version was supposed to fit in just 32 bytes and was written for a programming contest.  Inspired by his vid, I created a new shorter version of my own "orthogonal" version of the 10PRINT program.  As typed in, it should be less than 32 bytes. In the video jump to the 50 second point to avoid my excruciating typo at the beginning:

All this prompted Emerson Costa to a do a little refining of his own for the Brazilian MCE-1000 8-bit computer:

I also created a version of the program using the SG6 screen mode.  This one creates a maze that should be functionally equivalent to the one created by Commodore version:

Finally, I don't think I have blogged about a simple game I converted from the Sinclair ZX81 last week. It's called "Space Taxi" which many folks pointed out was the name of a famous Commodore 64 action game. Robin from 8-Bit Show And Tell mentioned:

"this is both 1) a super-early example of an "infinite runner" game and 2) has the same name as a legendary Commodore 64 game, but was made 2 years earlier! Neat game, too bad it's so unfair at the beginning of each screen with random spawn positions."

So the game is not a rip-off but a trailblazer for a neat game title!