Jumping Jack: Yet Another 10Liner and Some Updates

Oops I did it again.  It's a dull time of the year.  I sit waiting for emails to come back from students who need advising for the next academic year.  Otherwise, I'm reading or attending virtual meetings. But to break up the monotony, and sometimes just to escape the heat, its nice to head down into the basement and do some Basic coding.

I've got a third entry for the ASCII Basic 10Liner Jam on itch.io.  It's based on a game for the Sinclair Spectrum that I stumbled across called Jumping Jack.  I had originally envisioned a game using Semi-graphics 6 mode. 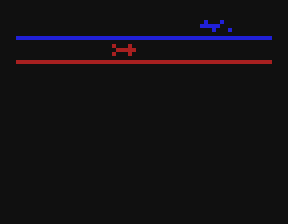 I'd even worked up an elaborate set of characters. 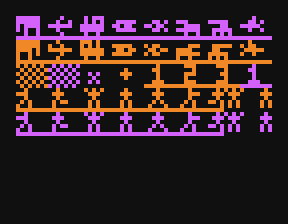 But when the 10Liner contest came along I decided to try for something less complex.  Obviously, I put the SG6 version on the shelf because getting the game logic running would require more of a time investment than I'm willing to give right now.  I needed a simpler set of projects.  The 10 line limitation really provides that.  Perhaps some day I'll work up a more full version in SG6 using Greg Dionne's Basic compiler.

In the meantime here is what my first stab at making little ASCII Basic version of the game looked like:

I eventually cleaned it up a little in terms of animation of the main character and his final jump up off the screen, along with some other tweaks, including the ability to type in a difficulty level from 1 to 3 at the "new game" prompt.  Here's a vid of the latest rendition:

If you want to compare it to the original Sinclair version the following is a Vid on Youtube showing the game play.  Mine is obviously a little more finicky than the original.  But that's what you get when you are limited to 10 Lines.  No frills.

JUMPJACK can be played online here using a JAVASCRIPT emulator.  Just select JUMPJACK from the cassette menu and type RUN in the main screen.

I also made some updates to my DFENDER entry (it can also be played at the link above).  I made the trail behind your cursor stay visible.  This makes more apparent where you have switched the background character to the ASCII values for the buff coloured semigraphic characters. This is all you have to do to explode the incoming missiles. When incoming missile characters are set into place, if they notice that the underlying character they are replaying is from the different colour set in the ASCII values above 128 (the 8 colors are represented in 8, 16 character sets) they explode and reset to the top of the screen.  So although you don't have to actually see the "trail" for this to work, people without knowledge of semigraphics might not be aware that, so I made the trail visible.  Now I'm thinking that it is like a trail of your anti-missile missile as it shoots through the sky.  I also added a little red explosion with the space saved in the code by removing the need to reset the pointer character, and some other reorganizing I did.