APF and Some Matra Alice Stuff

I've been taking some inspiration from the APF Imagination Machine for many of my recent BASIC 10-Liner programs.  However, what got me on to the kick was working a much more substantial programming project.  This was a complete re-code, based on videos and documentation, of the APF program Mission Improbable: Operation Alpha.  I wandered into some videos on Youtube of someone playing APF games. There were some nice playthroughs of some of the best machine language arcade games for the system.  But there were also videos showing humbler programs, including many that could easily be implemented in BASIC (although on the APF they were machine language). Mission Improbable was one these.

Getting APF cassette games running on the emulators for the APF takes some struggle.  I found converting the files to WAVs helpful.  However, I couldn't get this one to load properly or run. So I don't know if some or all of it was made in Basic.  However, I decided that I could probably just re-program the game.  I took a slow and careful approach (unlike when I'm programming 10Liners).  First I developed the menu systems and all the complex mission selection stuff.  Then I drew the main screen graphic.  Then I converted a variation of minesweeper to replace the alternate escape route option of the original.  Finally, I made the main game itself.  You can find a demo of the finished product here:

The toughest part was getting the flashlight beam effect of the roving guard. Besides that, the movement and other animations are pretty standard fare from other games I've made. Finally, my son Charlie used his finely tuned musical ear to recreate the win refrain-- The Stars and Stripes forever, although it first sounded like "Be kind to your web footed friends" to me.

Besides altering the escape route I also slightly altered the missions. Especially the Assassinate option.  The original had some complex activity of going into a dark room and listening to tones to zero in on the hiding Commandant. The APF has better sound generation than the MC-10, so perhaps such an activity would work, but the main game screen was already a little faster than the original game, so I opted for a moving Commandant that forces you to try to get close to him before he moves again.  He also is always flanked by two machine guns, which get left behind when he moves.  So the map screen gets progressively more difficult to navigate without getting shot.  I think it's an adequate replacement for the original mission activity.

The final step was tuning the timer to make for challenge, but without making it mission impossible.  I've hopefully hit the right balance.  I had to play quite a few games to satisfy myself.  I still don't know if I've got it right, but considering that I will likely be the only person to play the game, besides my increasingly reluctant beta-tester son Charlie, I eventually had to just pull the plug.  Since I played so much, it's often hard to tell if levels are too easy, or whether they just seem so because I've got so good (and as the programmer have inside knowledge).

Another system that I have taken actual source code from is the Matra Alice.  I'd seen "Coloric" listed for many years on Alice software sites, but as it was a puzzle game (and not an "action") game I always put it on the back-burner for porting.  However, I decided to finally get around to it.  Robert Sieg has been discussion Alice graphics on the Facebook group, and his comments reminded me that the Alice, despite its powerful new graphic chip, maintained a certain basic level of compatibility with the old MC-10 semigraphic 4 screen.  In other conversions I've found that there are often simpler MC-10 graphics hiding under what is essentially a thin veneer of extra special effect based on the new graphic chip.

This turned out to be the case with Coloric.  Although it was placed on 40X24 character Alice screen, it still used standard SET/RESET for a lot of the basic work..  I just had to shift things into the smaller 32X16 space.  I found that every thing fit.  I just had to omit some of the embellishments and minor extra instructions present on the screen.

Goal of the game

A palette made up of 7 or 10 boxes of various colors is displayed on the screen. The objective is to change all the colors in order to make the palette homogeneous without any square deviating from it. At right side of the screen, the transposition of each color is indicated.

This transposition code varies every Instant, and time is limited.

How to change colors.

It suffices to move your cursor through the boxes of the palette by pressing the sulvantes keys:

Your position is indicated by the flashing box.

The 10 levels offered (from 0-9) present the possible difficulties:

For example: at level 6 the colors change coding 71 times; allow the 7 colors of the palette, 3 are transformed in the target color, 2 in a different color and one in another color; one changes to black.

10 colored squares appear on the screen. Now is the time to take advantage of your visual memory, one run after the other is blinking.

Find out which one of them hasn't flashed. Place the white cursor under the square of your choice (with the arrows), to validate, press up key (W).

The score is established in a similar manner; whatever the chosen level. we earn 10 points each time we color a square in the target color. Furthermore. if the intermission test is passed, the score increases by a bonus proportional to the level of difficulty.

The highest level that I've been able to win is level 7: 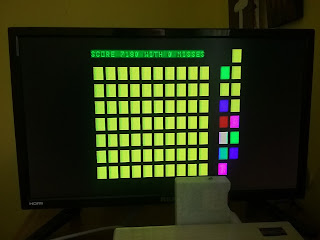 What got me primed for translating Coloric was that I had turned me attention to translating the French of a visually stunning educational game for the Alice called "World Geography."  The most visually impressive part of the program takes place in the middle program when a spinning globe graphic is displayed in all its semigraphic-4 wonder.  It's so easy to translate programs with the help Google translate.  We're lucky in the MC-10 group to have the resources available to us from the Alice.  All that it takes to get access to it is a little effort of translating.
Posted by jgerrie at 17:05