Been pretty uninspired so far this RetroChallenge. I have a number of old type-ins at varying stages of readiness, that I planned to get working. Some are just rough text listings from scans from online PDFs. Others have to be typed in the old fashioned way. None of them have gripped or inspired me. At least not as much of some others I recently completed. For example, Swordsman was a intriguing program listing I found in a Dragon 32 book: http://www.colorcomputerarchive.com/…/Sixty%20Programs%20fo…

I had to fix it up quite a bit. You can find the listing here: https://github.com/…/q…/Strategy%20%26%20Simulation/SwordMan


It was ported from Commodore 64 to Dragon and whoever did the conversion from the Petscii characters was not very thoughtful or inspired. I think they just did a text dump from the C64 and whatever came out they used without consideration of what might work better from the MC6847 character set. 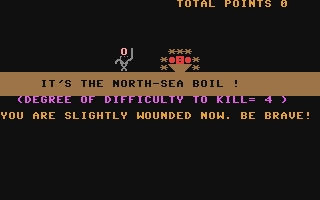 Some enemies like the "Gangrene Goat" were not even recognizable-- just an incoherent blur of hashes, which was sad because "Swordsman" has some charming characters as opponents. It's a real classic from the 8-bit type-in days. I had to do quite a bit of work on the swordsman himself to get the animation to look reasonably like the original and to fix a fundamentally broken implementation of hit detection. I had to play the original Commodore version quite a bit using Winvice to see how the game was supposed to look and play. I finally got it working like the original. Here's a final update, which shows an improved way I got the swordsman and the enemy "sprites" to overlap each other in their final movements:

Another port I worked on recently was "Sheepdog Trial" by Guy Morgan. It was from ZX Computing magazine (April/May 1983). The premise of trying to move a randomly moving herd of sheep was intriguing. If your dog gets too close then the sheep get scared and move more erratically. If your dog is too far away, you have no influence on their movement. But if you are at the right distance you can nudge them away from your dog (i.e. in the direction that you need them to go). More sheep equals more difficulty. I used color semigraphic block characters of different colors, with moving heads (black dots), instead of the original characters used to represent dog and sheep. I added a high score feature in case multiple players might ever wish to compete against each other.

For this Retrochallenge I will add some other posts of recent porting and type-in projects that I haven't blogged about yet. But I think I do have an idea (finally) for an original project. I had an idea for a randomly generated platformer game. The platforms will scroll up from the bottom of the screen. Your character's goal will be to proceed deeper into a potentially bottomless old mine. I plan to add randomly placed ladders which will go from the top of the screen where your character appears, to the bottom and one other randomly placed ladder. Enemies, possibly bats (or maybe different kinds, with different movement styles) will fly back and forth across the screen. Miss a jump and fall too far, and you lose a miner. Randomly placed items for points or aid/powers will also be placed on each level.  Here's a video of the platform generating routine: