The Bianco Mansion by Clive Gifford 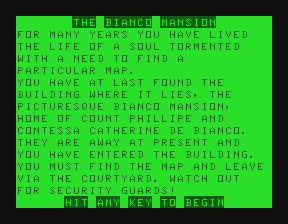 Stumbled upon a text adventure in a PDF of a book on the Color Computer Archive. I couldn't find any information about it on any of the text adventure databases and forums I know about. Asked folks on Facebook if they had ever played "The Bianco Mansion" by Clive Gifford and had one response by Gareth Pitchford that it seemed similar to another game by Gifford for the Commodore 64 called "The Nielson Papers" http://solutionarchive.com/.../Nielson+Papers%2C+The.html. He felt that some of puzzles were the same. Unclear which version came first, although Gareth felt the Dragon version, published in More Games for Your Dragon 32 by Virgin Books, might be first. He noted about Gifford that:

He did a few "enter & retrieve" type-in adventures... I imagine the Nielson Papers is probably the recycled version, if anything... fleshed out a little for the C64... Seems a smart move to use the same premise multiple times and just tweak things for books for different machines.

Garry over on the CASA Solution Archive also typed in the code, using a Coco and found it to be a pretty standard adventure for the time.  In other words, difficult, not overly impressive and annoying.  He noted in the "Classics" forum:

It's really badly written. There are lots of bugs. There are lots of guess-the-verb scenarios, at least two situations where you have to use multi-word input with the two-word parser and at least one situation where you have to refer to an object that is not mentioned.
The game has potential, but suffers from juvenile inexperience and lack of testing. (The author was still at school when the book was written.)

In my MC-10 version I have fixed many of the bugs that Garry mentions. It's hard to remember them all. There was one where if you "wore" the gloves you got electrocuted when you cut the fence with the wire cutters to escape at the end. You had to be just carrying the gloves. I fixed the mult-sentence input for gaining entrance to the map room (critical). Now you can just type PUT or USE KNIFE and it will prompt you "IN WHAT". Then you can type "LOCK." There was a bug in the routine that was meant to display message about locked doors in rooms that have them-- a missing NEXT command--so it only caught rooms with locks on North walls. There was a bug that allowed you to use the knife to gain entry to the MAP room even if you didn't have the knife yet. There was a bug that disallowed the ATTACK and HIT verbs when interacting with security guard.

I also added the ability to ATTACK/HIT/KILL the guard with GUN, so you don't have to recognize that only SHOOT or FIRE work with the gun. Made a minor fix to the guard random location or relocation routine. I changed spelling of "electrocuted fence" to "electrified fence." Didn't Americanize "torch" to 'flashlight" though (obviously European setting). Added movement shortcuts (N/S/E/W). Added delays where some messages flashed too quickly. Fixed a bug that if you got caught in the vault, it took you to the wrong end of game subroutine (the one that suggested you escaped, but without the map). Added win and failure graphics for MC-10 and the ability to restart rather than have to hit Break and type RUN after those graphics were displayed.  Added word wrap for long and variable messages and added words for clarity in a few messages. Added basic story background and game objective instructions at the beginning (taken from the book):

For many years you have lived the life of a soul tormented with a need to find a particular map. You have at last found the building where it lies, the picturesque Bianco Mansion, home of Count Phillipe and Contessa Catherine de Bianco. They are away at present and you have entered the building. You must find the map and leave via the courtyard. Watch out for security guards!

You can play "BIANCO" via on-line MC-10 emulator here: http://faculty.cbu.ca/jgerrie/MC10/JG_MC_Text_Adventures.html

Here's the map I worked out: 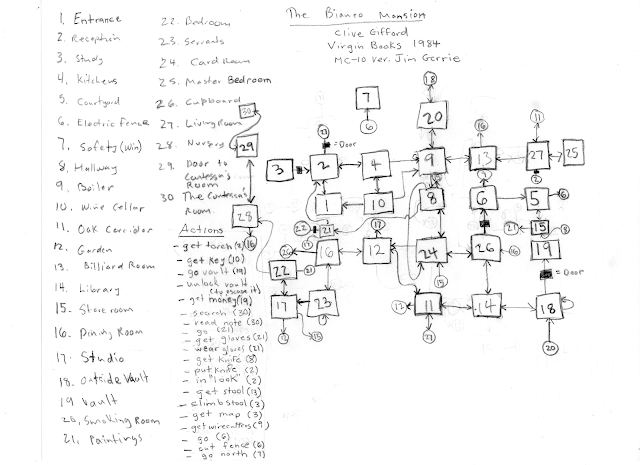 Here's a video of me playing and failing to win:

Garry pointed out an error regarding "clue" and "help." Clue initiated the quit routine instead of being a synonym for help. Fixed this.

I think the author's intention was that if you enter the vault without the key the door shuts and you get trapped. I think this because if you type "unlock door" while in the vault without the key it displays a message that you are "trapped in the vault" and then takes you to the "failure" end routine. I fixed the vault interaction in the following way in my latest: If you search in the entrance room to the vault, it tells you the vault has a time lock door and is "currently open." Hopefully this is enough of a warning.

I also found some other quirks. The way the author did the checks for the ladder or stool, you could bring the ladder to the study, but then "climb stool" and get the map, or vice versa. Also, you could "put silencer on gun," and then drop the silencer, but the gun would still shoot in silent mode. The item handling prevented you from picking up the stool or the ladder if you have more than two items, but didn't prevent you from then simply picking up more items (up to the full five) after you had the stool or ladder. I fixed this:

I also fixed the ladder/stool handling this way: Now you can either be holding it or have dropped it in the room before typing "CLIMB STOOL" or "CLIMB LADDER". In any case the item (ladder or stool) is dropped in the room along with the map. Also added a check to prevent the map from being dropped again (out of your inventory) if you should climb the ladder or stool a second time in the study.


The "wear" command was weird. You could wear the gloves and seemed like you were also be able to wear the ring, but the ring didn't disappear from inventory like the gloves did when you put it on. I made it so that when you wear the ring, it is removed from inventory like the gloves. I also made it so that you could still drop either of these items when they were being worn. Similarly for the silencer, if you put it on the gun, it disappears from inventory, but you can also still drop it if you want, and then the gun goes back to no longer being silenced.
I also like that if you search in the paintings room, it says you spot a "Monet", but then if you type "get Monet" it says it isn't there. So I changed the program to sound the alarm and summon a guard if you try to "get Monet" in that room. I think this is in the spirit of the game. You're not there to be a common thief, but to seek the map that has fascinated you your whole life.

I also changed the fighting routine. Now if you use the wire cutters, the rope or your hands, you non-lethally subdue the guards. However, using the rope results in you losing the rope from your inventory (to tie up the guard). This was in response to a suggestion by Garry that it seemed a bit extreme based on the premise of the game to kill a guard who was "just doing his job".

Also, worked on a quirk about "opening" in the letter mentioned by Garry. Now trying to open the letter simply results in a message saying it doesn't have to be opened.

Finally, I added a message for the library regarding the reading of books in there ("there's too many") and added a "Nothing" message when you are carrying nothing.

ADDENDUM TO THE ADDENDUM

Found another bug. After you get the map you see a message "The Alarm has sounded. You don't have much time!" But if you drop the map and pick it up again, it gives you the same message, which means the end timer has been reset to 25. This can happen anywhere, so you can effectively reset the the timer at will postponing the arrival of the police/end as long as you like! I changed it so this message only will display once.
Posted by jgerrie at 13:35