Got another entry pretty much squared away for the Homeputerium Basic 10-Liners contest.  It's called "Bomb Run" and it is based on some graphics ideas used by Robert Sieg a few years back in his game "SG6 Bomber." Robert is a prolific contributor to the MC-10 community, especially when it comes to programs that push the graphics of the MC-10 to the max. I think his game was meant as an experiment with the obscure (and neglected) semi-graphics 6 video mode of the MC-10. This mode gives you a screen of 64 by 48 pixels in two colours kind of like the lowres graphics of the Sinclair ZX81. However, unlike the ZX81, no text is available, although I have created a very chunky 3-pixel by 3 pixel character and number set for use in this mode. Here is a pic of a game I ported from the NEC PC6001 (it also uses an MC6847 graphics chip), which uses these characters: 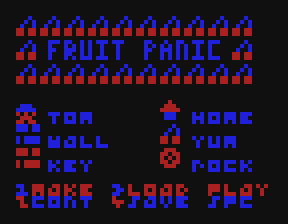 The Motorola MC6847 is actually capable of putting 4 colours on the screen in this mode (as it does on the PC6001), but because of the simplicity/cost minimization of the MC-10 it is not wired up to fully utilize all the features of the chip. However, there is an alternate colour set to red and blue. You can see it here in a duelling cannons game I made: 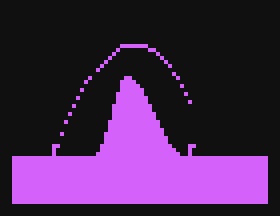 The other color is orange, so on the whole this set is much brighter on screen. I switch to this alternate colour set when bombs hit their target to provide a flash effect. Robert does something similar in his original game. He switches right out of the mode and back into the 64 X 32 Semigraphics 3 (SG3) mode, which also has ASCII characters available.  It makes for some pretty freaky flashing. Here's a vid of Robert's game:


As you will see, I used much small targets than him. I found his targets just a little too easy to hit, even with the plane bobbing around. But I really liked his plane graphic and the scrolling concept. I programmed the game from scratch to make sure it fit 10 lines. I drew the graphics using a simple Semigraphics 6 graphic editor program that I created. It prints its screen to a text file which I can then just cut and paste from as needed into my program editor (Notepad).

Here is the program breakdown:

The game can be played in the MC-10 Javscript emulator hosted at my faculty website at Cape Breton University: http://faculty.cbu.ca/jgerrie/MC10/JG_MC10.html
Just click on the "- Select Cassette -" menu and choose "BOMBRUN". Then type RUN and hit the <ENTER> key.