Welcome to my first post for RetroChallenge 2018/04. Carlos Camacho posted in the Coco Facebook group some semi-graphics 3 mock-ups: 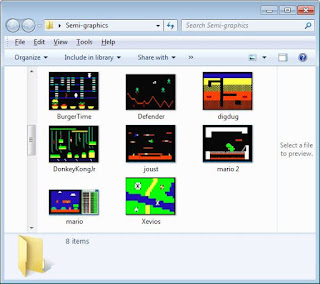 They were meant to be inspirations for games using that mode.  He used the drawing tool that Davie Mitchell came up with for the Dragon. His mock-ups included Mario Brothers and Joust. Thought I would try to bring one to life. I chose his Dig Dig graphic to start with (see upper left corner above). Converted his idea to semi-graphics block characters for the MC-10 using my SKETCH program.  Then I just printed the screen to text output and used wordpad to edit that output into 16, 32 character lone screen lines with PRINT statements added. Also drew some simple characters. The astronaut character is cyan and there are also green dragons and a nondescript purple crawler of some sort.  This video shows the simple random motion I started with:

Next step will be to add some intelligence to the monsters and decide how much of the game dynamics can be implemented in a tight main BASIC loop that still allows for a challenging game.  Here's a video of the original arcade version:
Carlos also sent me a helpful link to the basics of the history of Dig Dug.
Posted by jgerrie at 13:39