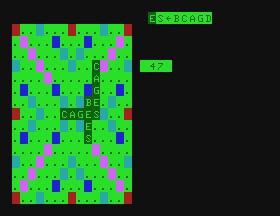 Well, I have a somewhat working scoring system in place.  At least I think so.  If any expert Scrabble players out there, for instance, could tell me whether the arrangement of tiles above should work out to a score of 47, it would be much appreciated.

I also have a functioning "tile re-arranging" routine that allows you to move tiles easily and to select the word by moving the terminator character (the left pointing arrow in the above).

What remains to do is to add the multiple player stuff (up to 4) and to design the right hand side of the screen.  I would like to add a little "key" for the different values of the letters and one for the meaning of the colours (i.e. DWS, TWS, DLS, TLS).  I also will add the ability to choose between using the program simply to keep score for a real game and actually playing the game just on the computer.  In the former, you will input your tiles each turn, whereas for the latter, the computer will provide you with tiles for each turn till the virtual bag of 100 is empty.  Which reminds me, I still have to add provision for 2 blank tiles...

I'm taking this project a littler easier than I have of late.  I had quite a rush there for a while getting projects squared away for the Restospectiva and the CocoCoding contests.  Now I'm back to simply programming for the fun of coding.  My wife finds games like Scrabble, Sudoku, and Mahjong relaxing.  I finding making computer versions of such games relaxing.  But playing... not so much.  So if there is anyone out there willing to do a little beta testing like my son Charlie, please let me know what you think of my games.  Critical comments or bug reports are much appreciated.