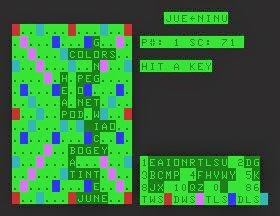 I've released the final version of Scrabble Helper for MC-10, Coco and Dragon.  It can be found on the Yahoo MC-10 group site, the Yahoo Coco site, the Dragon Archive Forums and my own site.  I think I've got rid of most bugs and added all the features I can add, given memory restrictions.  Recent additions include adding a bunch of 2 letter "killer" Scrabble words.  Now the word look-up function ("H") does not just provide a list of the first five words found, but continues rolling over the list of five until you hit a key or until it reaches the end.  If it reaches the end of its dictionary, it then prints a list of the five longest words found.  I got rid of a few lingering proper nouns from the dictionary and cleaned up the display when the game ends.  I also added a total point calculation so that games between multiple players can be assessed in terms of the overall level of competition.  You can also now choose to play as a single player for playing games of "Scrabble Solitaire."  I should mention that the key in the bottom right lists the letters not only in order of ascending point values, but descending order of the number of tiles.  In other words, "E" comes first because the largest number of tiles are "E"s followed by "A"s and then "I"s, etc.
Posted by jgerrie at 17:24