I have ported Steve Wozniak's Apple II Integer BASIC source for a "Breakout" clone known as "Little Brick Out." This game was according to Wozniak, one of the first action games for a home computer. He had worked previously at Atari on the arcade cabinet version of Breakout. Part of his motivation in making the Apple I was to allow him to create such games not having to to use dedicated circuit boards but completely in software.  This would allow games to be easily changed and customized by users.  So it is interesting to note that in such a small game (it fits in less than 4K) the Woz provides the ability of the user to modify the screen colours. The second half of the video demonstrates this ability.
While I was at it, I added the ability to choose which keys to use for the up and down motion of the paddle.  I thought this would be useful as the game is very quick and very tricky. Also, the MC-10 doesn't have a paddle input device like the original Apple did. I chose to make the screen paddle move in jumps of two, which makes it quick enough to jump from top to bottom after the ball is served.  The paddle is 3 spaces tall so there is a little overlap for each move, but this can make it a little tricky to figure out how to best cover the space where the ball is likely heading on the left wall.  I have only managed to almost clear the board twice in many dozens of games.  Here is proof of one of these: 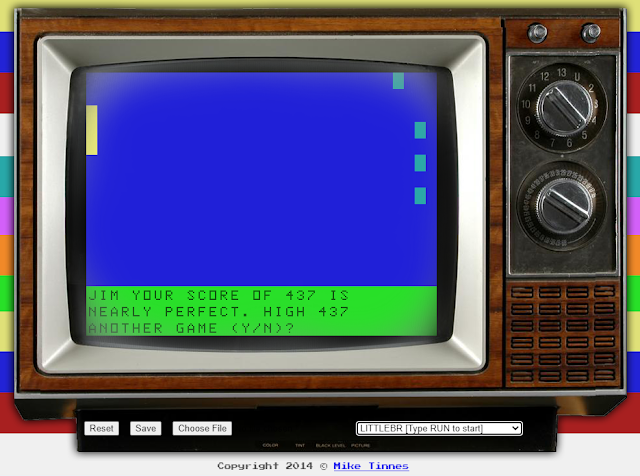 The game is very addictive, if only because the Woz has put in comments on your final score that range from "Terrible" to "Nearly Perfect".  However, since the bricks on the first rows are worth far fewer points than those on the far right near the wall, you seem to get a disproportionate number of "terrible", "lousy" and "poor" scores.  If you don't seriously whittle down those last two or three rows the "good and excellent" scores will likely remain out of reach.  If you clear all the bricks you "Win the game!"  There is no continuing to get the highest score possible.  This is probably a blessing as the random motion of the ball will make hitting those last few blocks an exercise in extreme patience.
Apparently Wozniak programmed the game in less than half an hour.  It was meant as a test for his Integer BASIC interpreter.  However, as the Apple community moved on to Applesoft BASIC with floating point integer BASIC games were largely left behind, and so it has been difficult finding copies of the source. I have yet to locate a place to allow the game to be easily played in an emulator or online.  Here is where I located the source in the 1978 "Apple II Redbook" reference Manual as an example program:
http://www.classiccmp.org/cini/pdf/Apple/Apple%20II%20(Redbook)%20Reference%20Manual%2030th%20Anniversary.pdf
I have added the details of the game to my Type-In Mania website. You can't launch the code from there, as that is my faculty web space and I am trying to make a "Clean" page that only includes games permitted by original authors. So I hope to be contacting Mr. Wozniak very soon. I'll keep you posted.