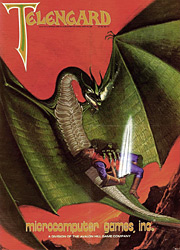 I have ported Telengard from TRS-80 Model 1/3 to TRS-80 MC-10. Had to sacrifice fountains, misty grey cubes, jewel encrusted thrones and mysterious boxes with buttons, but it now fits in a 20K 8-bit computer. Still present are altars, teleports, stairways, pits and elevators. It has a procedurally generated dungeon map, which means it has 50 levels and millions of rooms! Here's a link to an neat interactive map.

To get it down to under 20K I used MCX hardware add-on and its extended BASIC as emulated in VMC10 to renumber the code. The nice thing about the MCX hardware is that it allows for over 30K of memory, which provides the initial space required to work on the code while also being able to run and debug one's edits. Eventually I got to a point, where it fit in the regular 20K and I simply turned off the MCX and extra memory.

Lots of little sacrifices were needed. No character name. Separate screen (hotkey-H) to display items carried.  No command help screen (the original use of the H key). I shortened and standardized many messages, which means that some of the unique and quixotic ones have disappeared. No title screen.

All the spells and magic are there, although I have yet to test the highest level spells (above 2).  All the monsters are there.  All the special items (scrolls, rings, etc.).  You can save your game progress when you make it to an Inn, but unlike the original game, you can also save your game at any point in the dungeon by hitting the * symbol. When you save the game while in the dungeon you will be returned to your save point.

I used the senior TRS-80 Model 1/3 BASIC source as the start because is was already setup to use only 16 rows. Its graphics were simple semigraphic block character-based. In many ways my version looks more like the Apple or PET versions because it uses text character graphics, such as dashes and exclamation marks for doors and an X for the player. It is a complicated game with "permadeath" being the main experience of players at the beginning. A good manual is a must for playing it properly.

I have hidden "The Orb of Charlie" (in honour of my son Charlie) at a specific location on level 3 as a goal for play. Once you retrieve the ORB it will be permanently displayed in the bottom right of the screen. This addition is meant to be some minor recompense for the loss of the major location items (fountains, thrones, etc).

I really enjoyed finding out some of the complex and somewhat contentious history of this program by Daniel Lawrence, which stretches all the way back to the mainframe and mini-computer network systems, before jumping to the first home-computers in the late 70s.

Now the MC-10 can be numbered among those computers that have a version of this classic program-- albeit a somewhat simplified version-- but with some unique features of its own.