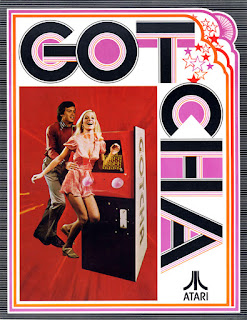 Don't know what's going on there.  In any case, the game mechanic involves a continuously changing maze. The logic of the mechanic of the change is difficult to discern, but I thought I might be able to recreate it, at least to some extent, on the MC-10:
Apparently the original game cabinet used some "breast" shaped cups as controllers.  After complaints Atari changed them to standard joysticks. Seems like a pretty blatant attempt at using sex to market a game to teenage boys, but it wasn't enough to overcome the mediocrity of the game.  It was no Pong. Here's another video of the original, but just the game play:
I changed the game to be single player. You move your cursor to collect coloured dots randomly placed on playing field. You have to avoid running into walls, or, because the walls are continuously redrawn, having the walls run into you.  There is a time limit, so you have to try to move fast.  Dots will move if you don't get them in time.They can also sometimes become enclosed by the walls of the changing maze.  Here is a video of what I managed to come up with.  I have tweaked it a little since making this video.  Now the changing walls can't erase the target dots.  I also have tried a technique of using a period to replace zero numeric constant in the draw statements, which I recall someone saying can make MS Basic run a little faster.  Not sure if it is true, but it doesn't seem any slower either.
So that definitely wraps it up for me for this Autumn' RetroChallenge.  Thanks to John again for organizing and to all the other participants for sharing their retrocomputing hobby.  I look forward to seeing what you folks get up to next year.
Posted by jgerrie at 16:25