The Valley: The Adventure Continues

Found out "The Valley" actually started out as a very popular type-in for the Commodore Pet, which was then ported to a variety of systems including the original TRS-80 Sharp MZ-80, BBC and Apple. Here are some links discussing it:

I think, from what I have read that this classic RPG was first published in Computing Today April 1982. I was able to get a listing and based on that and the viewing of many pictures of various versions, I realized that the Newbrain version had departed from the original in some ways. The most obvious was that instead of having two castles at each end of the central "path," the Castles were simply placed randomly.  Also, the map was redrawn every time you entered the valley scene from one of the other scenes (Swamp, Forest, Tower). By pouring over the original listing I was able to restore the game's function to be more like the original Pet version. I was also able to clean up the graphics quite a bit, such as making the castles look a little more like castles and the tower more like a tower. Adding better collision detection also prevents attribute clash between these elements. Now the save game feature actually saves the map info so the valley remains steady from saved game to saved game. Lots of other minor fixes too.  Here's how it looks now: 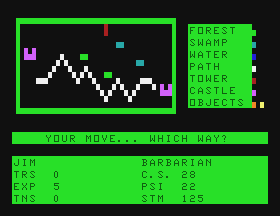 Now forests and swamps, like in the Pet version, are two characters wide. The tower is two characters high. Also revamped the beginning instruction screen to provide more detail about the keys used in the program and revamped and sped up the key input to allow for the option to use all eight directions, instead of just up down left and right, as I think it was in the Newbrain version (which made moving very tedious). Now you can use either:
QWE
A D
ZXC
or
TYU
GH
VBN.
The original used the numeric keypad for movement.  Since mine uses the left letters of the keyboard you must press R instead of E to get a report of your rating level and what items you have recovered. I also changed the map routine for the Tower, Lair and Temple so that it used the original Pet routine: 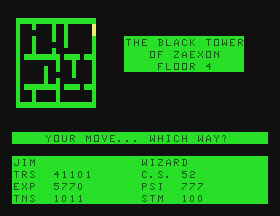 Now the maps are much smaller (and less tedious to explore) and more interesting than the ones generated by the Newbrain code: 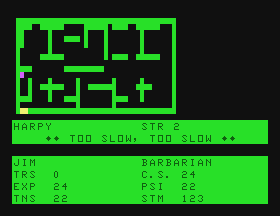 I also changed the lake and island drawing routine for the Swamp and Forest to use the Pet code. On the whole it has been a very satisfying project. I've learned about a classic RPG and done some intensive code fixing with the help of a very nice article published in Computing Today back in 1982... 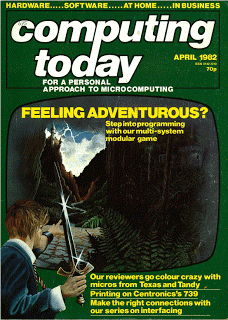