I have a colleague at my university, who when I mentioned my interest in old Basic programs recalled playing a game called "Fur Trader." I told her that I had done a port of a classic simulation called "Oregon Trail" and I think she said that she had played that one too, but had really liked Fur Trader because of its connection to Canadian history. 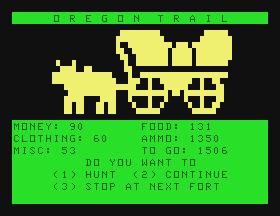 Since I had so much fun porting and playing Oregon Trail, and I'm also a big Canadian history buff, I thought I would try to look for Fur Trader. I can almost always find a TRS-80 version of any classic Basic text oriented program so I went to one of the major archives for that system that I've stumbled across over the years and looked under the "F" filename section. Sure enough, there was Fur Trader. I then used a handy little utility called TRSTools by Mathew Reed to view the Basic source on any TRS-80 disk or cassette file (for a cassette files you must first drag and drop the file onto a virtual disk).  Here is a link to an Atari site with a page scan from the a David Ahl book of games that includes the game.

Then it was just a question of cleaning out the commands distinct to the elder TRS-80. Micro Color Basic doesn't have the DEFINT command, for example, to allow designating variables as integers. Everything must be floating point for the MC-10 so sometimes some strategic INT functions must be added to a program if there are operations that really need only an integer. In the case of Fur Trader, the program used a number of PRINT USING commands to format trading values and costs to two decimal places and with a leading dollar sign. Over the years I've built up a collection of special Basic routines to recreate the functionality of commands like this. I had one in my collection for printing values with just two decimals and no leading space (so the dollar sign can be right next to the first digit).  Here's what it looks like:

You assign the number to variable CC and then GOSUB 8. The subroutine returns string I$ formatted to two decimal places and no leading space. You can then print it directly or add it to another string for printing or further string formatting, such as my word wrap or reverse video printing routines, which generally take M$ as their input.

As with my conversion of Oregon Trail, I added some simple graphics to try to help spice up the program a little. In this case I used my SKETCH program to draw some simple fort diagrams. Here is Fort Hochelga (Montreal): 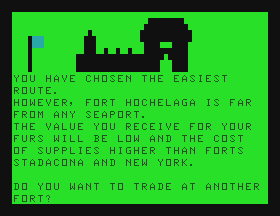 The original title screen describes the program as follows:


You are the leader of a French fur trading expedition in 1776 leaving the Ontario area to sell furs and get supplies for the next year. You have a choice of three forts at which you may trade. The cost of supplies and the amount you receive for your furs will depend upon the fort you choose. You also specify what types of furs that you want to trade.

It's a very simple simulation. Basically you choose the fort you want to choose to trade at from a selection of 3 possibilities and the numbers of different types of pelts. The game randomly selects some hazards and trading prices depending on the fort. I'm not really there is much skill or planning involved. I haven't examined the code in enough detail to figure out whether there is anything more systematic than random numbers that determine the prices, but I think the hazards you run across on the way to the chosen fort are pretty much completely random.

An interesting bit of historical detail is that the Iroquois were traditionally the implacable enemies of the French since they had sided with their arch-enemy, the Huron, which is why your French trading party is in peril crossing Iroquois country on the way to one of the forts.

My hope is that when my son Charlie gets back from his first term at university that he might be able to help program in a brief snippet from a coureur de bois paddling song to add to the intro, or as part of a "travelling" interlude routine. He's my MC-10 sound programming expert. We generally use my MUSIC program to type in notes and then print a list of them as SOUND #,# statements to a text file using the MC-10 emulator's print to file function.

Here's a video of the program as it currently stands:

Another little program I made this month was a simple graphic demo. I subscribe to a number of Sinclair ZX81 Youtube channels. The ZX is the spiritual predecessor of the MC-10. It was obviously the inspiration for the kind of computer the MC-10 is-- an ultra-low-end entry level 8-bit. However, that market had largely disappeared by the time the MC-10 was released in 1983. The classic 8-bit home computers (Atari 800, Commodore 64, Coco) had simply come down enough in price to make ultra low budget machines unnecessary (except for poor flinty losers like me). But I digress. Unlike the MC-10, the ZX thrived in the brief heyday of ultra-low-budget-computing that it helped create. It has lots of fans and lots of Basic programs written for it. It also has a standard graphic resolution of 64 X 48 block graphics, which is a resolution the MC-10 also has in the form of its SG6 screen mode.

Youtuber ZX81 Programs ZX81 has put up a bunch of videos of simple, but interesting Basic programs written for the ZX81. One of these was called "ZX Type-in Program Pattern 2:"

Since the MC-10 and ZX81 share a 64X48 graphics resolution it was pretty easy to port the code I could see briefly listed in the video. The MC-10 lacks a PLOT command, but it can still do SG6 graphics with a few tricks using POKEs. My port uses a special Basic SG6 plotting routine I developed HIRES_SET&RESET2.TXT and not Greg Dionne's M/L plotting routine that I normally use in most of my SG6 programs. However, the MC-10 version is still faster than the venerable ZX81, but the ZX came first and blazed the trail!
Anyway, thanks to ZX81 Programs ZX81 for posting his videos and thanks to the archivists who have contributed all the wonderful free Basic software for the TRS-80 available on the Net. And thanks to Creative computing for it interesting simulation and my colleague Janice Tulk for the suggestion for another fun porting project!