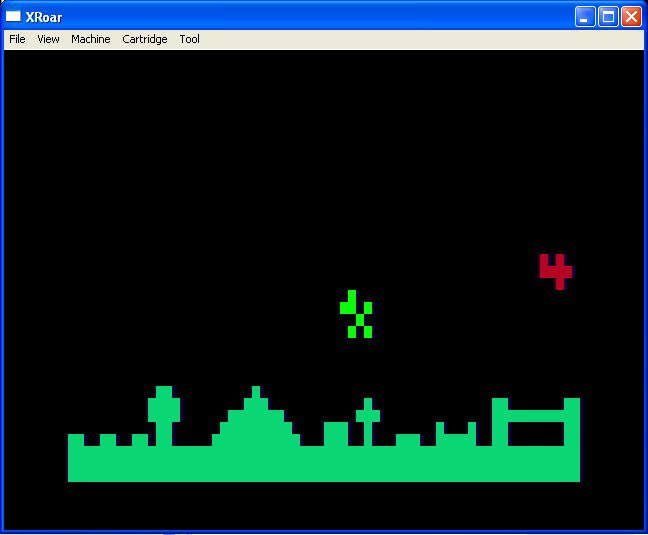 Well I've made another (possibly final) entry to Allen Huffman's 4K TRS-80 Color Computer Challenge. This program is a game idea I have been toying with since I first posted about it back in February 2013. It basically grew out of an attempt to represent the figure of  an airplane pointing in 8 possible directions using only the chunky block graphics of the MC-10 (and as Allen suggested, probably inspired by Air Combat for the Atari). Here is the initial sketch I made using my simple but handy graphics program "Sketch." 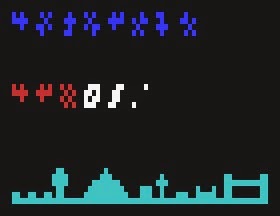 I had also originally planned an elaborate graphic for the title screen: 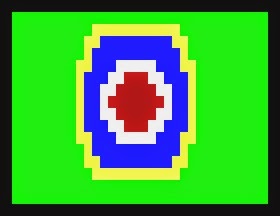 However, this was obviously a no-go if I was going to make a game that could fit into 4K. However, I was able to wedge in the simple 8 direction plane graphics and the skyline of London (my apologies to any Londoners out there if it is a complete miss on accuracy). The game is much simpler than the one I had originally envisioned, which would have involved flack bursts and enemy planes that shot back. In the version I  did create a single enemy plane travels back and forth from a random starting point on either side of the screen. However, I think that the game is probably much more playable than it would have been if I had not been constrained by the 4K limit. That limit really enforces a rigorous simplicity that probably results in a faster and more challenging BASIC game.  But you be the judge.  Here's a video:
The planes are less flickery in the real thing. The frame capture rate at which the Cam Studio software I use to create my videos is probably set too low to capture the animation accurately, but unfortunately the VMC-10 emulator is such a resource hog that I have to keep the rate low to prevent both programs from slowing each other down excessively.
Posted by jgerrie at 19:18