I have always been fascinated by the ZX-81 computer because it was the template upon which the MC-10 was based. The MC-10 was obviously meant to appeal to the same kind of extreme low budget home computer market of the early 80s.  By 1984 that market had dissipated.  Yet MC-10 users like myself looked back to that brief period of budget computing as a sort of "golden age."  Budget machines like the ZX required monumental levels of ingenuity to overcome their intrinsic hardware deficiencies. One of the greatest examples of such ingenuity was 3D Monster Maze:
I have wanted to create a version of this program for the MC-10 since learning about it through magazines in the mid 80s. However, not knowing machine language, it seemed unlikely that I would ever be able to make anything even remotely like it. Still, I always kept my eyes pealed for Basic 3D maze programs with the thought of possibly tweaking one to create an environment for some kind of denizen like the terrifying T-Rex of 3D Monster maze. Such searching lead me to port several 3D maze programs:
Both of these programs had specific problems. Rat maze was converted from a hires Coco program and so I used the special lowres 64 X 48 mode of the MC-10 to more easily convert the hires 256 X 192 graphics (each axis only had to be divided by 4). However, this special mode only had two colors and additional difficulties (it required complex pokes to use) that would make it difficult to create a fast animated arcade game. Also, the code was very difficult to understand. 3D Labyrinth by Dieter Fryer was a conversion of a VZ-200 program that also used a higher resolution graphics mode. I was able to convert it to lowres 64 X 32 graphics, but like Ratmaze, these on the fly conversions sapped the speed of the wall rendering. The wall "texturing" (which looks more like that of 3D Monster Maze) also added complexity to the code. For both programs the complexity and conversion issues seemed likely to leave little room for adding an additional layer of a real-time arcade quality action to the program.

Finally I discovered a very simple 3D maze engine for one of the late 70s text only hobby computers programmed by Don Scales in 1980. It was also called "Labyrinth" and was made for a machine with a limited resolution that converted easily to the 32 X 16 text screen of the MC-10. I was able to get it running after dealing with some issues regarding integer division. Part of the rendering took advantage of the fact that the numeric variables of the Basic of its native machine (I can't recall which now) were integer only and that concatenation automatically occurred whenever division occurred. After realizing this I was able to put in some INT commands where they were needed in order to get it to render 4 levels of depth:
Because it was a very spartan and simple wall rendering engine it was an easy process to shift the wall graphics from text to the lowres color block elements of the MC-10 and there was enough speed in the rendering of the walls to allow for speedier arcade quality movement and the addition of the code needed for a simple AI and animation of an enemy. I chose a "killer tomato" because drawing such a figure would be much easier than the complex artwork of "Rex" from the original 3D Monster Maze. Here's what I ended up with: 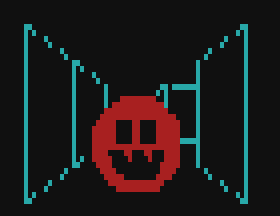 It may not quite be up to the shock horror level of 3D Monster Maze, but for a Basic program I think it's pretty good. I added a complex high score screen which reports the progressive success percentages of different players so my son and I could play alternately for the highest success rate at avoiding "Big Red" (as we came to call the tomato).

Unlike the original, this program draws a true maze (there is only one way out) so its possible that you can find yourself stuck with having to get past Big Red. We left it this way after some consideration because Red was still too slow to make the game an exercise in sprinting away from him until one could find the exit. Instead, one must carefully search for the way out, while avoiding being eaten by Big Red. Then, if the player determines that Big Red is camped out on the way to the exit, we made it possible for you to "lure" Big Red into following you (if you can keep ahead of him). If Big Red "sees" you (i.e. if you see him) then he will turn and come in your direction. However, when you can't see him he generally (but not always) travels in straight lines until he hits a wall, at which point he chooses a new random direction.

Since the MC-10 has sound, you get a sequence of progressively higher pitched beeps once he comes within 4 squares distance of you (any direction). This is in the place of the classic messages of the original such as "you hear footsteps" and "Rex sees you", etc.  I think of the beeps as the sound that Big Red makes as he bounces along the hallways...

Anyway, the following video will give you a sense of the game play:
And greetings to all the other folks doing Mark Wickens' Summer Retrochallenge! Check out his site to find out more about their projects and about the growing on-line retrocomputing community.
Posted by jgerrie at 18:33