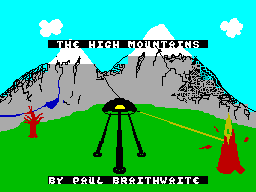 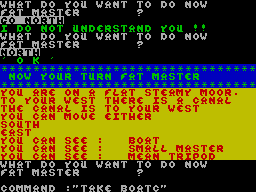 The images to the right show screen shots from a unique text adventure made for the ZX Spectrum by Paul Braithwaite.  The game is called "The High Mountains."  It was based on John Christopher's Tripods trilogy.  This game allows up to five players to take the roles of the human resistance or the alien masters and their tripods. There are relatively few puzzles in this game, but a fairly large area to move around in and plenty of NPCs. Originally published as a type-in game for the ZX Spectrum in the British magazine Personal Computer News #79 there was also a VZ-200 version.

This game is very interesting because this is the only multi-player text adventure I've ever come across. Each player alternately gets a number of turns to explore the world of the game. You can choose to either be a baddie alien, in which case you go around trying to kill the humans, or a human character, in which case you have to collect various items and interpret various clues in order to figure out how to thwart the alien invaders. The game allows you to play alone, but the story and puzzles are fairly simple. I imagine the time pressure created by trying to complete your appointed tasks before the other players complete theirs must add a nice element to the challenge. The game wouldn't be much fun to play as just an alien alone.  It would simply be an exercise in moving until you run across all the human players and kill them. The combat seems somewhat random, although there are weapons that can be picked up at various locations in the game. I'm unsure how they affect combat. There might be opportunities as an alien character to interfere with the other player's ability to complete the game by seizing or moving objects. However, combat can make players drop things, if you are willing to risk possible death, so there are ways for human characters to win objects back. I am unsure if, when played with others, it is recommended that they not be allowed to view the screen, but I suspect this might be so (or an "option"). In that way, if you're an alien you can hide or move objects, and the other player will have a harder time finding them or knowing when they need to confront you to try to force you to drop them. If you're a human character, it would give you the opportunity to try to hide or use circuitous routes to get to objects unmolested. I suspect knowing the original book series would also add to game play (although I think names have been changed to protect the original author against a copyright challenge--for example the first book of the series is called "The White Mountains," not "The High Mountains").

I created a version of the program for the TRS-80 MC-10, which was ported from code for the VZ-200 version that I managed to get a copy of from Dave Maunder of the VZemu group on Yahoo, who found it on a German fan site (http://www.wolkenkratzerhaus.de/VZ/). The VZ-200 is a good source of porting code because it uses the same display chip as the MC-10 (and Coco and Dragon). In the course of porting the program I slightly condensed some of the descriptions and fixed some grammar and spelling errors.  I also noticed what I think is a catastrophic error in the VZ version, which allowed the non-playing characters to move completely off the "grid" of the map of locations--never to return!  This would effectively make the game unwinable for the alien characters as their job is, as Bender would say, "to kill all the humans."  If some can simply disappear completely, this becomes impossible. 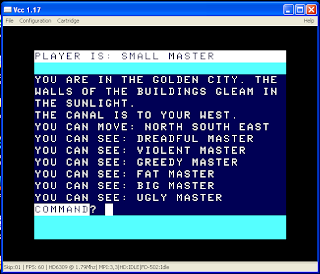 I've also now completed a further port to the Coco 2/3 and Dragon.  I've added it to a compilation I am building of my coding projects for 2013. You can link to that compilation here.

I will be adding to this compilation disk JGGAMES6.DSK and perhaps a JGAMES7.DSK if I run out of space over the next month or so as part of the the Retrochallenge 2014

If anyone out there has played this game, especially the VZ200 version, I would really be interested in hearing about your experience.  The Dragon version as a cassette file for the XROAR emulator can be found here: archive.worldofdragon.org

Addendum: Erico Patricio Monteiro shared a link on the TRS-80 Color Computer Facebook group about another multiplayer text adventure called "Spooky Manor" for the BBC Micro. Up to 4 could play.