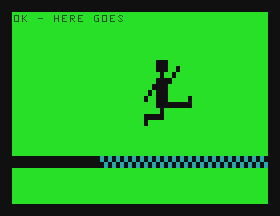 I noticed a BASIC adventure "Dr. Livingston: The Search For" listed on Curtis Boyle's site. I have searched through many Coco archives, but I couldn't recall every seeing a copy of this game. I also found a listing for it under Gaming after 40 blog. It sounded like an interesting game, that was having a little fun with the famous story of the search for Dr. Livingston, who disappeared into the heart of Africa in the early period of European contact with that continent.

I also found a listing for it under the Interactive Fiction Database. The reviews were't very good, but I think this was because most people had played an unofficial version of it for the Commodore 64 that was a little buggy. Here's what I said for a review I wrote for the the database:

I have read the other reviews and can't but wonder whether some of the frustrations result from the versions they are playing. The parser is not so problematic in the TRS-80 versions of the program. These machines often ran in all caps mode (the original TRS-80 didn't have uppercase characters and the TRS-80 MC-10 never had them). Apparently there were also changes made to the puzzles in many of the unofficial versions. The TRS-80 version I ported remains entirely true to the original TRS-80 16K version.

There are some intentional inconsistencies to the movement in the game. I didn't find them all that bad (especially compared to some other games from the era). For the most part I think they were carefully chosen and meant to enhance the effect of being "lost in the jungles and savannas" of central Africa. To a large extent, I think this technique works successfully in this adventure, where the setting makes it appropriate to use. Once I had some mapping in place, it wasn't all that problematic and there is a kind of logic to the backs-and-forths.

There are some really charming aspects to the game. The quicksand graphic is a wonderful piece of TRS-80 chunky pixel 8-bit animation. If you die the program simulates a return to the basic command prompt, before surprising you with a resurrection to a restore point part way into the game (preventing a need for a complete restart).

The game is challenging and doesn't have any of the totally arbitrary deaths that are so common in games from this genera. I found the plot to be a nice balance between slightly humorous almost fantastical whimsy and an attempt to remain true to the Victorian mythology of the original quest for Dr. Livingston.

For fans of 8-bit Basic adventuring I would highly recommend this game. But for less hardy souls, it might be better to stay away from venturing into the dark heart of the Victorian imaginary.

I had asked if Curtis could put his hand on his copy, but it sounds like he's buried under a pile of original disks. He said he'd keep his eyes peeled. In the meantime, I put my hands on the original TRS-80 version of the source code and over Good Friday and this Easter Weekend I plunked away at converting it to Micro Color Basic. I don't think I have ever come across so many convoluted long IF-ELSEIF lines before. Some took a number of different stabs at it before I got them right. The really fun part was re-creating the graphic for the jumping character animation.

I ran into some snags at the end in the form of some strange behaviour with FOR/NEXT loops.  I think this might have been a result of the fact that like a lot of early programmers the author of this game use a lot of FOR/NEXT loops for searches which they exit ungracefully from the middle of using a GOTO statement when they find what they're looking for.  I always try to properly finish a FOR/NEXT.  Anyway, I fixed a few of these and started using my own variable for my additions to the program to avoid conflicts with the FOR/NEXT variables used in the original.  Another, difficulty with porting was the use in the original TRS-80 16K version of IF structures like this:

It's possible in original TRS-80 Basic to dispense with the THEN command.  In Micro Color BASIC this can only be done using the GOTO command. Others, like LET don't work.  Had to weed all these out.  Also the programmers had used DEFSTR to define a bunch of character string variables without dollar signs, another feature missing from Micro Color Basic. I think it is fully debugged now.  I have played it through to its end a number of times and in a number of ways.  Here's a vid of LIVNGSTN.C10. At the end of it you can see the effect of the fake "exit to Basic prompt" before it revives you to a restore point.  Very clever little effect that demonstrates the care lavished on the game by its original programmers, Carl Russell, Karen Russell, Ralph Fullerton, Becky Fullerton. (published in Softside, Vol. 2. no 12):