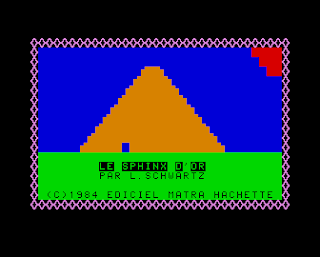 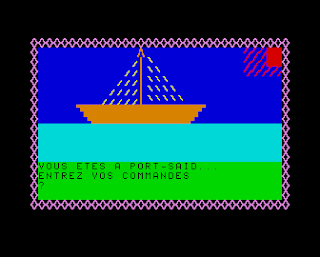 The Matra-Hachette Alice was a home computer sold in France starting in 1983. It was a clone of the TRS-80 MC-10 produced through a collaboration between Matra and Tandy. The Alice was distinguished from the MC-10 by its red case.

Unlike the MC-10, the Alice became a fairly popular computer and Matra later released two successor models with much improved graphics and a built-in assembler. The Alice 32, released in 1984, shared the case of the original, but was a different computer inside with the EF9345 video chip in place of the MC-10's Motorola MC6847. It had 16K memory as standard. The Alice 90, released in 1985, featured 32K and a full-size keyboard.

Because of the introduction of the EF9345 not much of the Basic software for the Alice will work with the MC-10. The EF9345 is capable of 40 and 80 column text and most of the software you can find on the Net uses one of these modes. However, a few programs still use the 32 character mode. In order to maintain some backwards compatibility, Matra made a special screen using the 40 X 24 screen with a 32 X 16 window positioned in the middle and a black border around it consisting of the unused rows and columns. This means that you can still gain access to the columns and rows around the 32 X 16 screen through the use of PEEKS and POKES. I found a Basic game for the Alice that uses this 32 X 16 mode (mostly) with only a few hires embellishments and a few screens that use 80 column mode directly: The Sphinx d'Or. 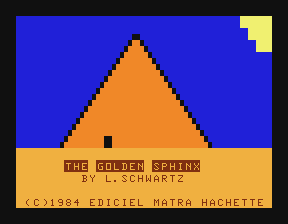 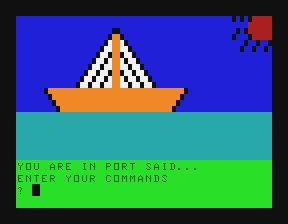 But besides little details like these, it is essentially a Basic graphic text adventure that uses mostly standard SET/RESET block graphics. Of course, it is in French, but with the help of my son Charlie, who was home from Dalhousie University and a graduate of late French immersion for grades 6-9 here in Sydney, and Google translate, it wasn't long before we had English versions of all the text messages. Thanks Charlie (there's an Easter egg in the code in honour of you)!

Then I just had to convert a few of the screens that used the 80 column mode. Also, the original program from the Alice was split in two parts and had a multiple- loading process for different parts of the story. I think this was because the Alice 32 only has 16K RAM (and a 16K ROM--hence the name Alice 32). But I was able to combine both programs into one that fits entirely in a 20K MC-10 (4K + 16K RAM pack) by using the RENUM command that comes with MCX Basic. The first part of the program had the starting screens and also the final game completion puzzles and win routine. A value was POKED into memory that was preserved between loadings that re-directed program execution to the intro or completion routines depending. So you had to load the game, then load the second part, and then re-load the first part to complete the game. There is a version of the Master Mind game in the completion routine that used the 80 column screen and graphics. I was able to create new semi-graphic images for this and all the other aspects that used hires. The only hires thing I couldn't recreate was that fancy permanent woven banner around the screen. But you can't have everything. But, banner aside, we now at least have a new piece of software for the MC-10 compliments of the French. Merci beaucoup citoyens du france et Monsieur Schwartz! 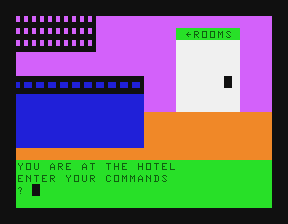 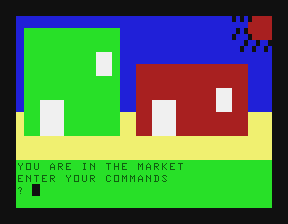 I still have to solve all the riddles of the adventure, but I have tested most of the individual parts of the game. When I'm confident that it is bug free I'll post about in the Interactive Fiction Database, etc. and see if I can find some volunteers willing to try to solve the game and test it more fully.
I also have completed some minor projects such as adding James Diffendaffer's speed-up POKE to a bunch of my existing arcade games and Darren's Atkinson's (Mechacoco's) keypoll routine that allows multiple keys being pressed at the same time on the keyboard to be registered at the same time. This allowed me to create a version of Tandy's two player Pong game that does't allow the other player to block your key input by holding down his keys. This represents true two-player arcade action coming to the MC-10 for the first time.

Here is a partial list of my activities over the last several months that I have been wanting to blog about: 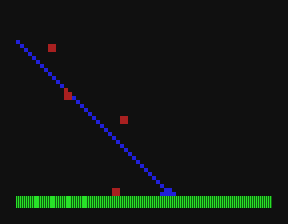 ALATTACK is original game for the 10 Liner Basic Contest. Roughly based on game "Alien Attack" by Scott McCann and Peter Lear. 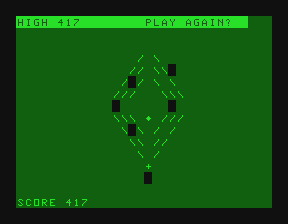 RACEDRIV is a port of some obscure code from a Dragon 32 Magazine I found on the net.  Taken from a page scan. 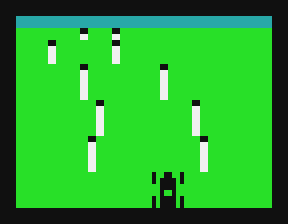 ALERT10 is an original game that tries to recreate a Defender style game in 10 Lines of Basic code.  Little slow in starting up, as it has to build the scrolling map, but interesting once it gets going. 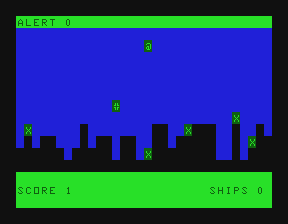 MAZERACE was also for the 10 Liner contest.  Mechcoco moded it with some machine code to draw the maze in a blink of an eye! Not a legitimate entry for the contest but still amazing; literally! Thanks Darren! 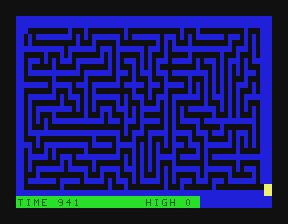 TEMPEST is a port of a Coco game created by Carangil for the 10-Liner contest. It requires the hires commands of the MCX pack. 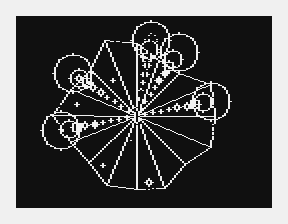 C-TREK is a port from a Coco Version of the Classic Star trek game.  I have about a half a dozen different variations of this type of game now for the MC-10. I added a little text graphic of the "Enterprise" to the title screen. 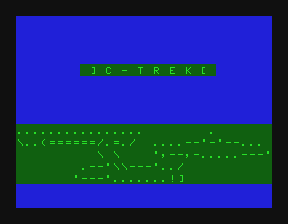 VAMPIRE is a text adventure from Australia, originally for the TRS-80 or possibly one of the other TRS-80-like clones. I took my source from the Commodore 64 version though (if I recall correctly). 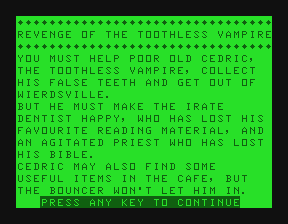 Robert Moore posted on the Coco Facebook page asking whether there were any other "Stellar Empires" addicts out there. This prompted me to look this game up. STELLEMP is a port from the Coco variation, although I started using TRS-80 Model 1 source code that lacked an AI computer player. It's another variation on the space-trading-empire-building genre. This one has lots of combat and up to 4 can play. I have converted a number of similar games to MC-10, including what is likely the original of the genre, "Star Traders" by Dave Kaufman, and "Andromeda Conquest" by Avalon Hill.


Stellar Empires
I think this is likely my last post for the RetroChallenge month. To sum up: I was able to finish working on my MC-Chase game for the MC-10 and then convert it to Coco Basic in time for Coco Fest. And I did the same for Dig Dug. I also accomplished some bug testing of my port of Bruce Moore's "Forest of Doom" Coco hit. I'm pretty confident that version is bug free too. And I have a working version of the Golden Sphinx ported from the Matra Alice.

I send thanks to all the other RetroChallengers. I've been a very busy at work this month so I have had little time for looking at everyone else's projects, but I look forward to browsing them over the coming months.  And thanks to John Lineville for running the contest.