There is a modern web port, which allows you to play the game online. It can be found here: https://blastar-1984.appspot.com/

I hope my version might provide an experience a little more like the original program, since it is still in Basic and running on a 8-bit system architecture, rather than being a port to a modern web language/environment. The web update strikes me as something of an amalgam of sped-up features and artificially slowed down features. I'm not sure if the author is using some kind of emulator for the Spectravideo 328 or has translated the features of the program to a modern web language environment. The following shows an update of my first version of the program (as seen in the video above):

In most of the blurbs discussing the program on the Net, there are two statements made that I think might be errors. It is often mentioned that the program was made for the Commodore VIC-20. This is not the case, unless there are different versions out there about which I am unaware. The Spectravideo 328, an early MCX-like 8-bit computer, seems to be the system used by Musk. Also, it is often stated that Musk was paid $500 dollars for this program. This seems too high compared to my sense of what people typically were paid for programs by magazines at the time. I wonder whether Musk was paid something worth approximately 500 Rand, and simply failed to properly translate that amount into "American dollars" in his discussion of his first program. My sense would be something like US$50 - $150 would be more normal, but I could be wrong about this estimate.  However, Simon Goodwin's article "Writing for the early UK Home Computing mags" suggests that something between £5 to £90 (exchange rate was about 2.3 at that time) was closer to the norm for what he earned early in his career.
The magazine in question is "PC and Office Technology" from December 1984: 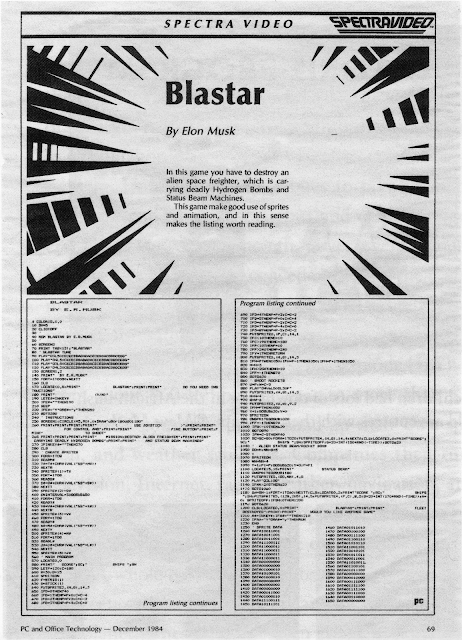 The game code for my port can be found here:
https://github.com/jggames/trs80mc10/tree/master/quicktype/Arcade/Blastar
Posted by jgerrie at 10:44